A Norwegian man was rushed to hospital in Pattaya today (Thursday), for treatment of serious knife wounds to his abdomen, believed to be self-inflicted.

Police said that they did not find any traces of a fight in the tourist’s room, at a hotel in Bang Lamung district. They claimed, however, to have found a small pack of cannabis, which was already open and partially used.

Pattaya police overseeing illegal narcotic suppression said that the 54-year-old tourist might have hallucinated and hurt himself.

A hotel staff member said that he heard shouts and screams coming from the room, in which the Norwegian tourist had been staying for about six months. He said he went to investigate and repeatedly knocked on the door, but the occupant refused to open it, so he used a pass key to enter the room.

The staff member said he saw blood on the floor of the room and immediately alerted the police. The tourist was then rushed to a hospital in Pattaya for treatment.

Since the decriminalisation of cannabis, hemp and their extracts, with THC content of less than 0.2 percent by weight, on June 9th, there have been several cases of people being sent for treatment after consuming cannabis, including a few cases of self-harm. 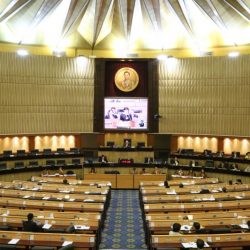