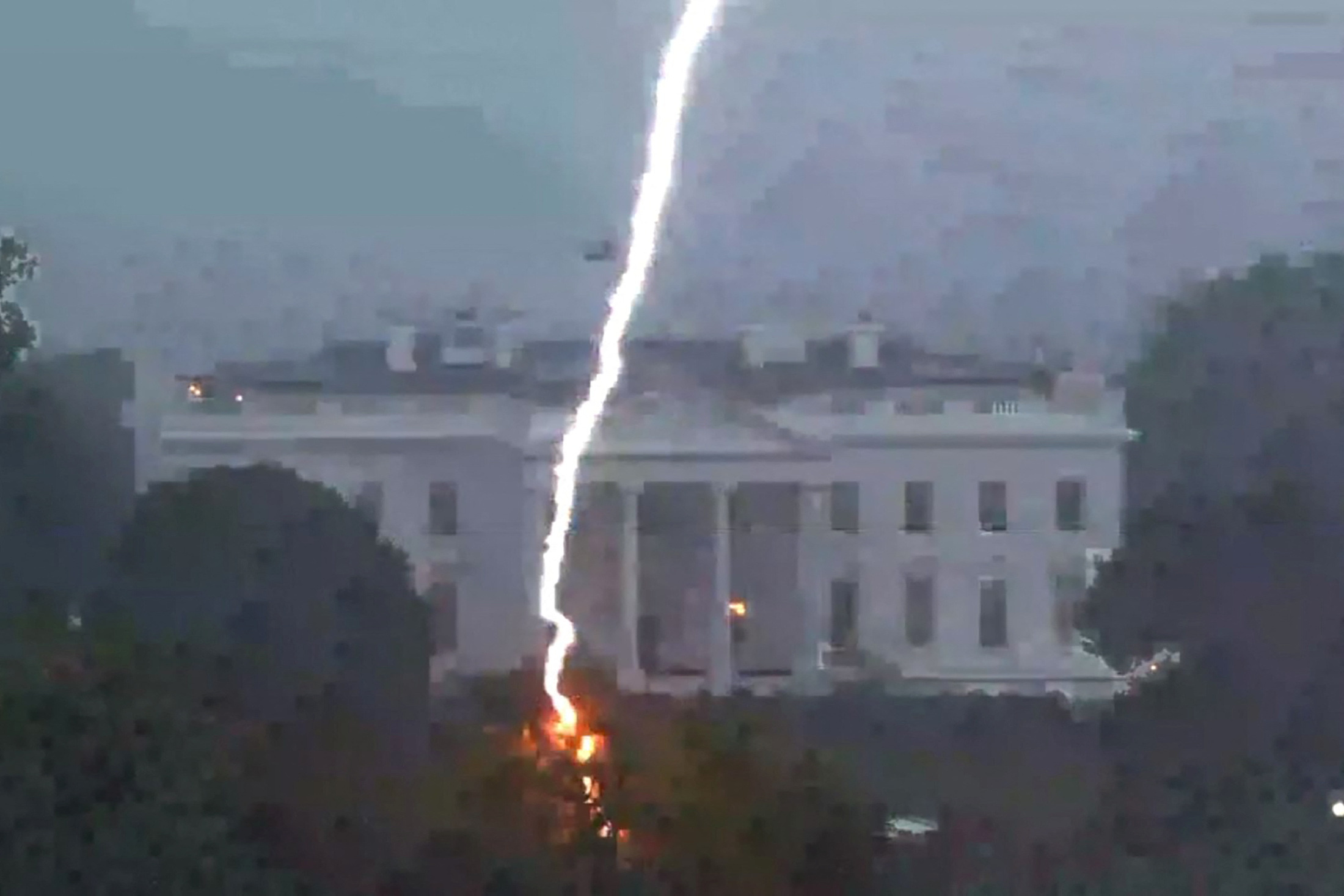 A lightning strike hits a tree in Lafayette Park across from the White House, killing two people and injuring two others below, during an August 4 evening thunderstom as seen in this framegrab from a Reuters TV video camera mounted on a nearby rooftop in Washington, U.S. August 4, 2022. REUTERS/REUTERS TV

Scientists say that climate change is increasing the likelihood of lightning strikes across the United States, after lightning struck at a square near the White House, leaving three people dead and one other in critical condition.

The hot, humid conditions in Washington, D.C., on Thursday were primed for electricity. Air temperatures topped out at 94 degrees Fahrenheit (34 degrees Celsius) – or 5F (3C) higher than the 30-year normal maximum temperature for Aug. 4, according to the National Weather Service.

More heat can draw more moisture into the atmosphere, while also encouraging rapid updraft – two key factors for charged particles, which lead to lightning. A key study released in 2014 in the journal Science warned that the number of lightning strikes could increase by 50% in this century in the United States, with each 1 C (1.8 F) of warming translating into a 12% rise in the number of lightning strikes.

Fast-warming Alaska has seen a 17% rise in lightning activity since the cooler 1980s. And in typically dry California, a siege of some 14,000 lightning strikes during August 2020 sparked some of the state’s biggest wildfires on record.

Beyond the United States, there is evidence that lightning strikes are also shooting up in India and Brazil.

But even as lightning strikes increase, being hit by one is still extremely rare in the United States, experts say. Roughly 40 million lightning bolts touch down in the country every year, according to the Center for Disease Control – with the odds of being struck less than 1 in a million.

Among those who are hit, about 90% survive the ordeal, the CDC says. The country counted 444 deaths from lightning strikes from 2006 through 2021.

The two men and two women struck by lightning on Thursday while visiting Washington’s Lafayette Square, just north of the White House, were among the unlucky few – struck by a bolt that hit the ground during a violent, afternoon thunderstorm.

The lightning hit near a tree that stands yards (meters) away from the fence that surrounds the presidential residence and offices across from the square, which is often crowded with visitors, especially in the summer months.

“We are saddened by the tragic loss of life,” the White House said in a statement on Friday. “Our hearts are with the families who lost loved ones, and we are praying for those still fighting for their lives.”

Later on Friday a third victim, a 29-year-old male, was pronounced dead, the Metropolitan Police Department said. Further details on the victim were being withheld until the next-of-kin were notified.

Because heat and moisture are often needed to make lightning, most strikes happen in the summer. In the United States, the populous, subtropical state of Florida sees the most people killed by lightning. COVID still a killer for 500,000 vulnerable people – but Thailand has new defense