The outer edge of Hurricane Florence began buffeting the Carolinas with wind and rain on Thursday as forecasters warned the monster storm would dump copious amounts of rain on the US East Coast and cause life-threatening flooding.

As Florence churned slowly towards the coasts of North and South Carolina as a Category 2 hurricane, federal and state officials issued final appeals to residents to get out of the path of the “once in a lifetime” storm.

“It’s getting late to evacuate,” said South Carolina Governor Henry McMaster. “You need to go on and get out now.”

Federal emergency management officials warned that Florence — while weakening a bit — remains a “very dangerous storm” capable of wreaking havoc along a wide swathe of the East Coast. 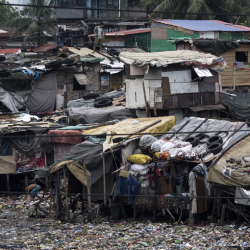