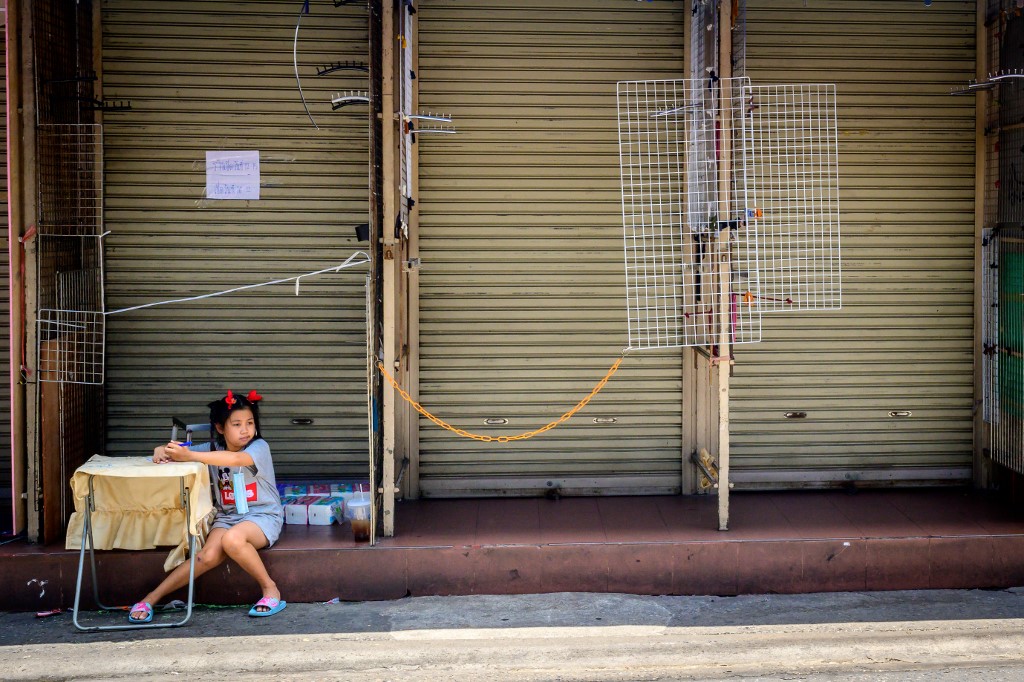 A child sits at a table in front of closed shops at Pratunam market in Bangkok. (Photo by Mladen ANTONOV / AFP)

The combination of a new wave of COVID-19 and delayed vaccination is set to wreak more damage on Thailand’s economy, with people’s incomes falling further and business risks rising.

Slow vaccination progress coupled with a surge of infections has prompted Kasikorn Research Centre to lower its growth projection for the Thai economy this year from 2.6 percent to 1.8 percent.

Since April 14, Thailand’s COVID-19 caseload has risen by more than 1,000 infections per day, indicating the latest wave is spreading faster than outbreaks early last year and in December.

Meanwhile, only 0.82 percent of the population of 69 million had been vaccinated as of April 19, according to Oxford University’s “Our World in Data Report”.

Prime Minister Prayut Chan-o-cha is facing mounting public criticism over his management of the crisis, especially in sourcing vaccines.

“Judging from the slow rate of vaccination, the government is unlikely to meet its vaccination target,” said Charl Kengchon, executive chairman of the Kasikorn Research Centre.

Prayut’s administration is targeting 2 million vaccinations in the first half of the year and 61 million in the second half.

Missing those targets is likely to delay Thailand’s reopening to foreign tourists, which is vital for recovery from the first wave of COVID-19, which saw the Thai economy shrink 6.1 percent last year.

Thailand’s economic growth rate projection for this year is expected to shrink from to 1.6%, from 2.8%, due to the third wave of the COVID-19 pandemic, according to the latest forecast by the Economic and Business Forecast Centre of the Thai Chamber of Commerce University.

In January, Kasikorn forecast that 2 million foreign tourists would visit Thailand this year.

It has now readjusted that forecast to below a million.

Meanwhile, domestic consumption faces another hit due to workers losing jobs, and working hours and income being slashed amid fresh restrictions to contain the surge in infections.

Kasikorn responded by dropping its forecast for private consumption this year from 3.4 percent to 2.8 percent.

The key factor governing economic recovery is the rate of vaccination. If the latest wave cannot be contained or a fresh outbreak occurs in the third quarter, the return of foreign tourists will be postponed for another one year, said the research house.

“The most pressing issue is vaccine distribution to fill gaps in the public health system. A daily caseload of more than 1,000 for a month would put the healthcare system at risk of collapse,” Kasikorn Research warned.

This worst-case scenario would result in huge hidden costs for the economy. The cost of living would rise and access to medical treatment would be limited. This could lead to a sharp drop in labour productivity.

“Hence, the damage would go beyond tourism and consumption,” the research house said.

April 16, 2021 About six million Thais have been rendered jobless, since the COVID-19 pandemic struck Thailand early last year, and 1.3 million university and college graduates are unlikely to find jobs or have opportunities to develop their capabilities, according to Khempetch Lenaphan of Thai Health Promotion Foundation (ThaiHealth) on Friday.

Business leaders are also worried about the delay in inoculating the Thai population.

Sanan Angubolkul, chairman of the Thai Chamber of Commerce, said the private sector would support government efforts to speed up vaccine distribution and inoculation, with private hospitals ready to import 30 million doses.

The Chamber of Commerce wants 70 percent of Bangkok residents vaccinated by the end of this year, at a rate of 500,000 jabs per day, said Sanan.

Everyone shares the concern over the delay since 70 percent of Thailand needs to be vaccinated before the country can reopen, he added.

The Federation of Thai Industries (FTI) has asked Bangchak filling stations and other businesses across the country to open vaccination points, said FTI chairman Supant Mongkolsuthree.

Meanwhile, the Bank of Thailand has launched a new soft-loan package worth Bt350 billion to boost small companies’ liquidity.

The government has about Bt240 billion left from the Bt1 trillion it borrowed last year to finance relief packages for people and businesses. 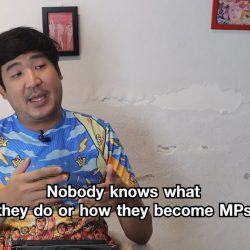 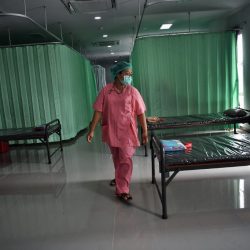