In the past several years, the Greater Mekong Sub-region has seen increasing illegal trafficking activities, especially drugs, which are often transferred via natural routes, with production shifting from Myanmar to the Lao PDR as the criminals try to change their routes.

Pol. Lt. Gen Yunyong Wetchaosot, Provincial Police Region 4 Commissioner said that illegal trafficking has been increasing and it seems to be increasing faster. It started in the northern part of Thailand and the authorities have been mobilising and strengthening their forces. The north is a mountainous area with many trafficking routes. So, the traffickers started to change their bases to the Isan region, as 670 kilometres of the Mekong River forms its border and the trafficking routes are like a spider’s web, which benefits them.

With over 180 years of relationship between Thailand and America, the United States’ International Narcotics and Law Enforcement Affairs Office (INL) has donated over US$370,000, or around 12.7 million baht of equipment to the police to support efforts to combat transnational crime in the Northeast, hoping it will be used to tighten security along the Mekong River.

Gregory Shaw, who heads the INL bureau at the US embassy in Bangkok, said now is the time to cooperate, as criminal trafficking networks have begun exploiting routes in Isan, where security has traditionally been lighter on the ground.

He said the situation continued to worsen last year, when nearly 100 million methamphetamine tablets were seized in this region, more than four times the number seized in 2019 and 2020 combined.

As Thailand is at the centre of the region, traffickers try to bring in a lot of illegal products to the country. According to Gregory Shaw, however, Thailand is now on the right track to fight them.

Pol. Lt. Gen Yunyong said that the US and the Northeast authorities have long worked together to ensure concrete measures are taken against transnational gangs. He believes the outcome has been mutually beneficial, with which Shaw agrees.

Shaw said that right now he is planning to stay in Thailand. Budget has been increasing, so he is looking forward to the opportunity to increase the training that is needed and to continue with similar donations to this one, especially about the technology, to help law enforcement to be able to patrol the remote border and counter the increasing technology being used by traffickers themselves. 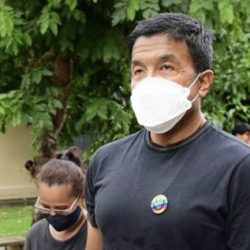 No masks outdoors to be proposed by new Bangkok Governor