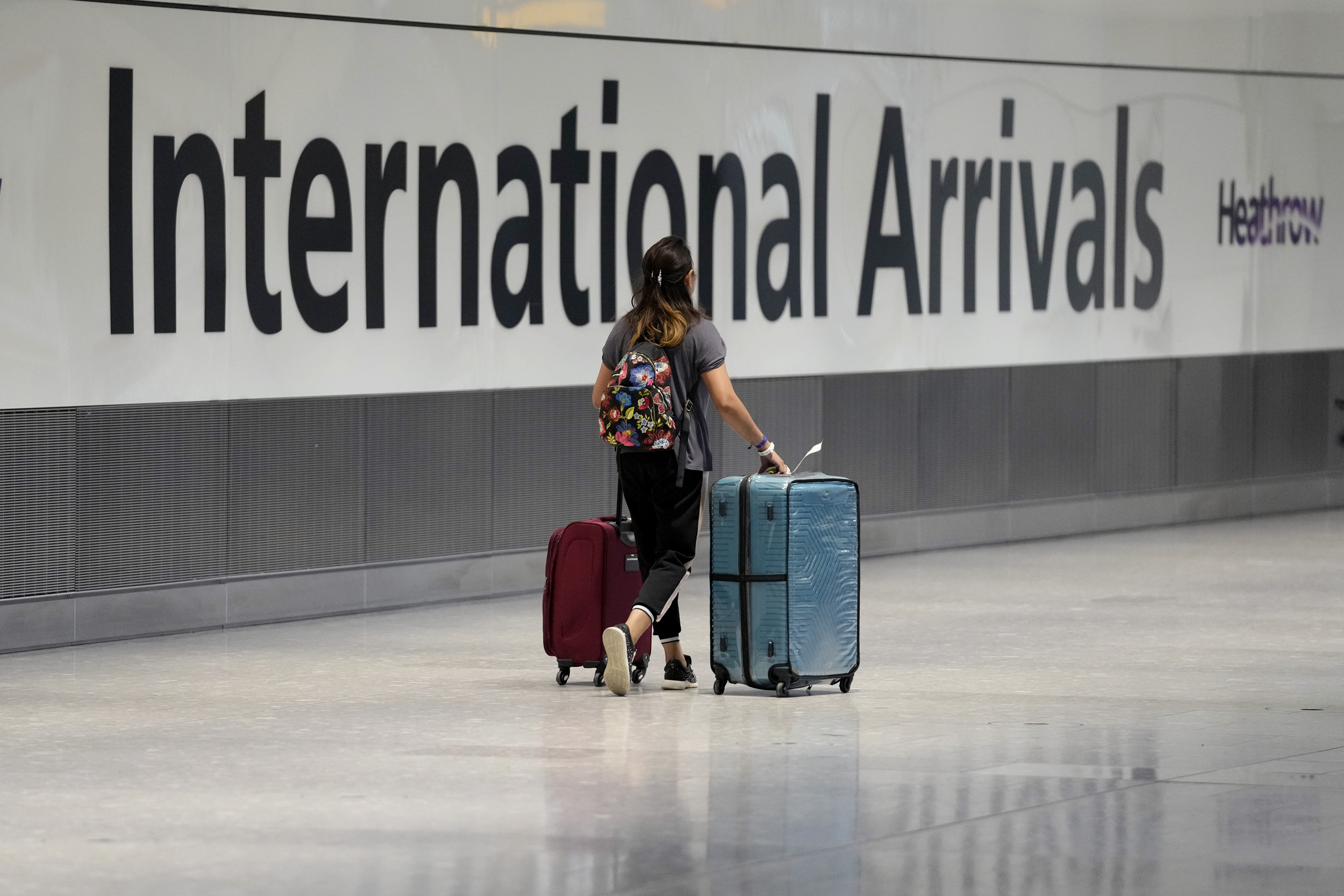 A passenger arrives from a flight at Terminal 5 of Heathrow Airport in London, Monday, Aug. 2, 2021. Travelers fully vaccinated against coronavirus from the United States and much of Europe were able to enter Britain without quarantining starting today, a move welcomed by Britain’s ailing travel industry. (AP Photo/Matt Dunham)

LONDON (AP) — Britain opened its borders to fully vaccinated travelers from the U.S. and the European Union on Monday as travel industry leaders urged the government to further ease restrictions and allow people to enjoy the benefits of a successful COVID-19 inoculation program.

The new rules came into effect amid reports that Prime Minister Boris Johnson’s government may add a new category to Britain’s traffic light system of travel restrictions, a move industry officials say would make many people decide to stay home.

As of Monday, fully vaccinated travelers from destinations on Britain’s “amber list” are allowed to enter the country without self-isolating for up to 10 days. The government is considering creating an amber watchlist to warn people about destinations that may be downgraded because of rising infection rates or the emergence of new variants.

“An amber watchlist will be viewed as a massive red flag, which is likely to cause bookings to those countries on that watchlist to collapse,’’ Huw Merriman, chairman of the House of Commons’ Transport Committee, told the BBC. “In my view, we don’t need any more uncertainty, complexity or anxiety for passengers or this beleaguered sector. It just needs clarity.”

British airlines and holiday companies are hoping for a late summer travel boom after the pandemic halted most international travel, slashing profits and threatening thousands of jobs. The number of passengers traveling through London’s Heathrow Airport, the U.K.’s busiest airport, fell 75% in the first half of this year.

David and Susan Handfield were among the first beneficiaries of the new travel rules Monday, seeing their granddaughter Charlotta for the first time after she and her parents stepped off a flight from Berlin.

Charlotta was born in February but virus concerns and travel restrictions prevented her parents from bringing her to London until now. Her grandmother greeted her with a delicate kiss to the forehead at Heathrow Airport.

“We’ve been waiting for this moment for quite a long time,” said Susan Handfield, 70. “We only heard a week ago that they booked the flights.”

While the Handfields benefited from the rules change, other restrictions still prevent many people from flying. Travelers are required to take expensive PCR tests to prove they are virus-free and countries including the U.S. still bar foreign travelers from crossing their borders.

John Holland-Kaye, Heathrow’s chief executive, said the British government should allow most travelers to use cheaper lateral flow tests and work with countries like the U.S. to ease remaining travel restrictions. This is warranted by the U.K.’s successful vaccination program, he said.

Almost 89% of adults in Britain have received at least one dose of vaccine and 73% have been fully vaccinated.

“This is a good start, we are showing that the vaccine is our passport to freedom,’’ Holland-Kaye said. “Let’s be confident in the vaccines. Tests show they work against delta and beta variants. So let’s start to show the vaccination will get us back to our lives as they used to be.”