Despite being the rainy season, the yearning for a natural environment, peace, morning fog and a cool breeze has prompted tens of thousands of Thai tourists to visit the country’s national parks, since the easing of lockdown restrictions on September 1st.

About 24,000 tourists visited Khao Yai national park in the north eastern province of Nakhon Ratchasima, which is the closest to Bangkok, since September 1st, including almost 8,000 a day over last weekend.

The chief of the park told Thai PBS that he believes the key factor drawing so many people to the park is a news report, which went viral, about a bear seen eating an omelette at the Pha Trom Jai cliff, as well as other natural attractions, such as waterfalls and wild species, which emerge from the woods to graze in green fields and to eat wild fruits.

He said, however, that limitations on the number of visitors are being imposed, to prevent overcrowding. For instance, at the cliff, the number of cars is limited to 30, 50 for motorcycles and 30 for bicycles.

Mr. Damrat Poprasit, director of the Office of National Parks, said that not every park drew large crowds of tourists, noting that many people remain concerned about COVID-19 and are reluctant to travel, adding that others might find it inconvenient to visit national parks because of the requirement for advance online registration via the “QueQ” app.

The ten most popular national parks, measured by tourist visits from September 1st to 7th are:

Damras said that ticket revenues do not relate to the number of tourist visits, because there are more foreign tourists in some parks than the others and the dual pricing system means that tickets for foreign tourists are 200 baht, compared to 40 baht for Thais.

He also explained that the National Parks Office does not urge park officials to compete with each other over revenue collection and, hence, key performance indicators (KPI) cannot be applied in the office.

Damras challenged a suggestion, by a Move Forward MP, that all the ticket revenue collected by the National Park Office should be returned to the state coffers, instead of being kept by the Department of National Parks, Wildlife and Plant Conservation, maintaining that the department needs the money for the development and rehabilitation of the parks and their facilities and for anti-poaching operations.

He said that there are many other national parks which do not earn any revenue. 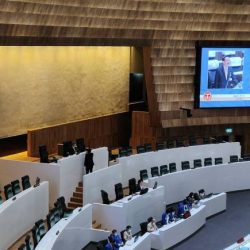