The Tourism Authority of Thailand’s projection of 11.5 percent growth in tourist arrivals next year may not be met, resulting in a revenue loss of about 50 billion baht unless Thailand can lure back more Chinese tourists.

For this year, total tourist arrivals were estimated at between 38-38.2 million – an increase of 7-8 percent from last year’s while total revenue from tourism business are estimated at 2-2.01 trillion baht – up 10 percent from the projected figure of 8 percent, according to TAT governor Yutthasak Supasorn.

Regarding domestic tourism business, Thais were projected to make 167.2 million trips for the entire year this year – up 4 percent from last year’s generating revenue estimated at 1.07 trillion baht.

Yutthasak said that if tourist arrivals from China could not be restored quickly, tourism revenue would miss the projection by 11.5 percent with revenue estimated at 3.4 trillion baht, still representing an increase of 10.4 percent from this year’s.

A boat accident in the sea off Phuket in July in which more than 40 Chinese tourists drowned and an unwitting remark about the accident by Deputy Prime Minister Prawit Wongsuwan plus an incident at Suvarnabhumi airport where a Chinese tourist was slapped by a guard have caused an uproar in China, prompting several tour operators to boycott Thailand and switch to other tourist destinations.

He disclosed that the cabinet would on Tuesday consider Deputy Prime Minister Somkid Jatusripitak’s big tourism promotion campaign for the last quarter of the year until New Year.

The promotion campaign includes the waiving of fees for visas on arrival. 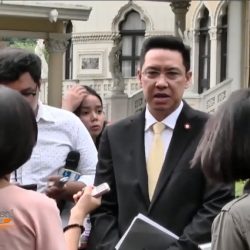