Monkeypox is difficult to control because most of the cases only develop mild symptoms, with a few blisters for 2-4 weeks, or remain asymptomatic according to Dr. Yong Poovorawan, head of the Centre of Excellence in Clinical Virology at Chulalongkorn University’s Faculty of Medicine.

In his Facebook post on Thursday, while making clear that it is not as life threating, Dr. Yong likens monkeypox to HIV/Aids during the early stage of infection, as is it does not produce any symptoms until the virus has spread throughout the body.

He predicted that the virus, which is mostly found in gay men and is spread through sexual contact, may spread to the heterosexual population and, eventually, to pets and rodents, as it has with the giant Gambian rats in Africa, because they share the human living environment.

Since the virus spread from Africa, Dr. Yong said that there are, currently, more than 17,000 monkeypox cases reported in over 75 countries worldwide, most in Europe and the United States.

He noted that 98% of the confirmed cases are male and only five fatalities were reported and only in Africa.

Most of the cases outside Africa are among male homosexuals and 40% percent of those cases produce blisters on the genitals, he disclosed.

In Thailand, two confirmed monkeypox cases have been reported so far. The first in a 27-year old Nigerian, who was in Phuket since last October and left for Cambodia following his diagnosis in Thailand. He has been tracked down and hospitalised in Phnom Penh for treatment.

The second case is a 47-year-old Thai man with a history of sexual contact with a foreign male. He tested positive for the virus after developing blisters and a fever. He is currently being treated at Vajira Hospital in Bangkok.

Ten people who share a house with have been advised to isolate for 21 days. Their specimens have been sent for lab tests to determine whether any of them are infected with monkeypox. 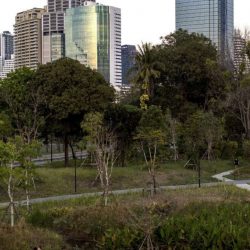 Working towards a greener, happier city