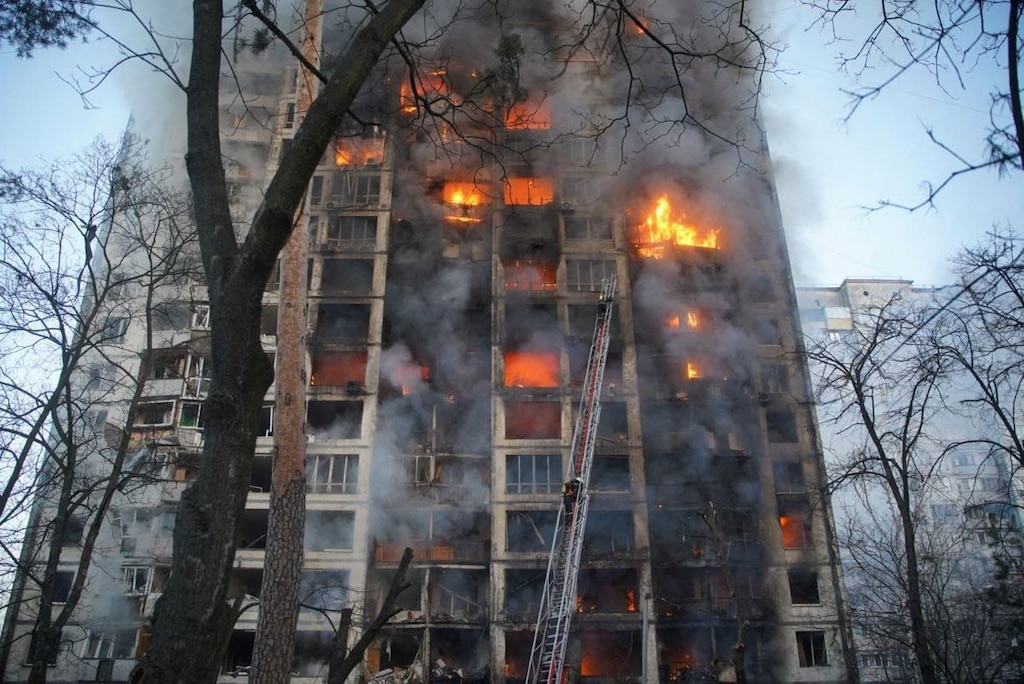 Rescuers work next to a residential building damaged by shelling, as Russia’s attack on Ukraine continues, in Kyiv, Ukraine, in this handout picture released March 15, 2022. Press service of the State Emergency Service of Ukraine/Handout via REUTERS

LVIV, Ukraine/KYIV, March 15 (Reuters) – Three European prime ministers rode a train for Kyiv on Tuesday, the first visit by foreign leaders to the Ukrainian capital since Russia launched its invasion, and a striking symbol of Ukraine’s success so far in fending off Russia’s assault.

“It is our duty to be where history is forged. Because it’s not about us, but about the future of our children who deserve to live in a world free from tyranny,” said Polish Prime Minister Mateusz Morawiecki, who set off across the border with Czech Prime Minister Petr Fiala and Janez Jansa of Slovenia.

Fiala said the aim was “to confirm the unequivocal support of the entire European Union for the sovereignty and independence of Ukraine.”

They will arrive in a city still under bombardment, where around half of the 3.4 million population has fled and many are spending nights sheltering in underground stations.

Two powerful explosions rocked the capital before dawn on Tuesday and tracer fire lit up the night sky. A high-rise apartment building was in flames after being struck by artillery.

Firefighters tried to douse the blaze and rescue workers helped evacuate residents trapped inside using mobile ladders. A dead body lay on the ground in a bag.

Sitting on the ground outside, resident Igor Krupa said he survived because he had slept under a makeshift shelter of furniture and metal weights: “All the windows went out and all the debris went into the apartment.”

But despite shelling that has reduced some cities to rubble, Europe’s biggest invasion force since World War Two has been halted at the gates of Kyiv, nearly three weeks into a war which Western countries say Moscow believed it would win within days.

Major road and train routes from the capital are still open and Russia has failed to capture any of Ukraine’s 10 biggest cities.

Hosting foreign dignitaries in his own capital would be a remarkable achievement for President Volodymyr Zelenskiy, who rejected offers to evacuate early in the war, staying under bombardment to rally his nation.

In his most confident public statement yet, Zelenskiy called on Russian troops to surrender, saying they and their officers already knew that the war was hopeless.

“You will not take anything from Ukraine. You will take lives. There are a lot of you. But your life will also be taken. But why should you die? What for? I know that you want to survive,” he said.

One of Zelenskiy’s top aides said the war would be over by May – and could even end within weeks – as Russia had effectively run out of fresh troops to keep fighting.

“We are at a fork in the road now: there will either be a peace deal struck very quickly, within a week or two, with troop withdrawal and everything, or there will be an attempt to scrape together some, say, Syrians for a round two and, when we grind them too, an agreement by mid-April or late April,” Oleksiy Arestovich said in a video.

“I think that no later than in May, early May, we should have a peace agreement, maybe much earlier: we will see,” Arestovich said.

The remarks projected a new-found confidence that Ukraine’s heavily outnumbered forces have thwarted what Western countries believe was Moscow’s aim – to topple Zelenskiy and install pro-Russian leaders in Kyiv.

Russia says it is not targeting civilians and is carrying out a “special operation” to disarm and “denazify” Ukraine.

Kremlin spokesperson Dmitry Peskov said it was too early to predict progress at talks peace talks, due to resume later on Tuesday by video link.

“The work is difficult and in the current situation the very fact that they are continuing is probably positive,” he told reporters.

In the city of Rivne in western Ukraine, hundreds of miles from the combat zone, Ukrainian officials said 19 people had been killed in a Russian air strike on a television tower. If confirmed, that would be the worst attack so far on a civilian target in Ukraine’s northwest.

Peace talks have focused so far on local ceasefires to let civilians evacuate and bring aid to surrounded cities.

Worst-hit is the southeastern port of Mariupol, where hundreds have been killed since Russia laid siege in the war’s first week. Russian troops let a first column of cars leave Mariupol on Monday but attempts to bring in aid convoys have failed for 10 straight days. Ukrainian officials said they would try again on Tuesday.

While Russia has failed to seize any big cities in the north and east, its forces have had more success in the south, where Moscow said on Tuesday it was now in control of the entire region of Kherson.

In an intelligence update on Tuesday, Britain’s ministry of defence reported demonstrations against Russian occupation in the southern cities of Kherson, Berdyansk and Melitopol, with troops firing warning shots to disperse crowds in Kherson. Russian forces were reported to have abducted the mayors of Melitopol and Dniprorudne, it said.

The war has brought economic isolation upon Russia never before visited on such a large economy. In Russia itself, it has led to a near total crackdown on free speech, with all major independent media shut down and Western social media apps switched off.

Late on Monday, an employee of the main state TV channel stood behind an anchor during a news broadcast and held up a sign in English and Russian that said: “NO WAR. Stop the war. Don’t believe propaganda. They are lying to you here.”

The United Nations says nearly 3 million people have fled Ukraine since the start of the war.

“I am fleeing with my child because I want my child to stay alive,” said Tanya who fled the southern frontline town of Mykolaiv across the Danube river to Romania. “Because the people that are there now are Russians, Russian soldiers, and they kill children.” 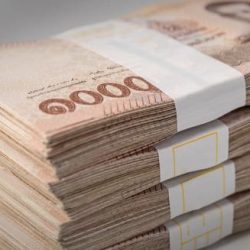 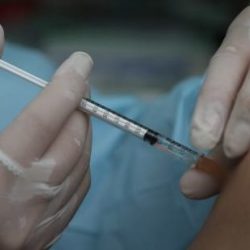