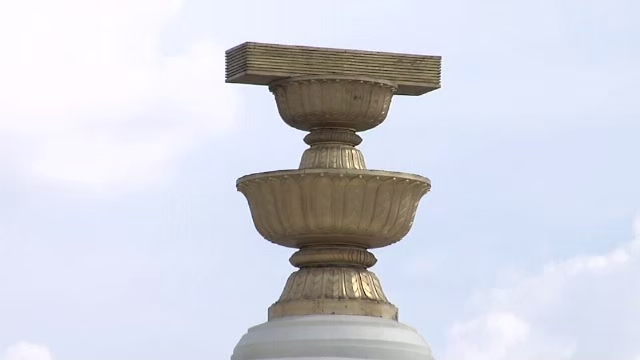 Bangkok’s Democracy Monument has long been the site of political protests in Thailand, most recently on Saturday, when the grand structure was wrapped in a white banner featuring pro-democracy demonstrators’ demands.

First unveiled in 1940, this monument to “people power” features a golden tray carrying a giant symbol of the Thai Constitution to commemorate Thailand’s transformation from absolute to constitutional monarchy eight years earlier.

However, democracy has been given little chance to take root in Thailand. The country has so far experienced 13 successful coups and nine unsuccessful attempts, meaning its Constitution has been rewritten 19 times.

This year, pro-democracy demonstrators have rallied regularly at the monument to demand a more democratic Constitution, the resignation of the junta-backed premier and reform of the monarchy.

Rising from the intersection of Rajdamnoen Klang Avenue and Dinsor Road in Bangkok’s Phra Nakhon district, Democracy Monument is a testament to the 1932 Siamese Revolution.

The central column carries the symbolic charter and stands three metres tall to signify the month of June, or the third month in the Thai lunar calendar when the Siamese Revolution took place. The height of “three meters” also signifies the three pillars of power under the Constitution – the executive, legislative and judicial branches.

The four buttresses guarding the main structure are 24 metres tall to signify June 24 – the date the Siamese Revolution took place. There are 75 cannons around the base of the main structure signifying the last two digits of the Buddhist era BE2475 or 1932, the year of the revolution. This is also marked by dragon sculptures – 1932 was the Year of the Dragon according to the Chinese zodiac.

Field Marshal Plaek Phibunsongkhram, a co-leader of the bloodless revolution, inaugurated the monument eight decades ago, declaring it would stand tall to remind Thais of the need to protect democracy.

However, the grand structure has also come to serve as a reminder of the lack of democracy in Thailand. Every time Thais feel their nation is straying from the legacy of 1932, they take to the streets and make their way to Democracy Monument.

The first time Thais rallied at the landmark was in 1957 to protest a rigged election. In 1973 and 1976, it served as the backdrop for historic uprisings as demonstrators gathered to drive out dictators.

In 1992, Democracy Monument was the site of another huge protest, which led to the fall of prime minister and 1991 coup-maker General Suchinda Kraprayoon.

In 2010, the red-shirt movement took to the streets to oust the Abhisit Vejjajiva-led government, which was allegedly formed inside a military camp.

Between 2013 and 2014, the People’s Democratic Reform Committee mobilised its supporters to bring down the Yingluck Shinawatra-led government on grounds of policy-based corruption.

Demonstrators returned to the Democracy Monument this year to drive out Prime Minister Prayut Chan-o-cha, the leader of the 2014 coup who returned to power in the 2019 election.

When demonstrators wrapped the monument with their statement on Saturday, MC Chulcherm Yugala – who was made a full general by the King earlier this month – suggested that the structure be torn down if it cannot be honoured.

His comment was immediately slammed by those pushing for democracy, but in reality, he is not the first person to suggest that the monument be pulled down.

In fact, the 1952 government approved a resolution to erect King Rama VII’s statue exactly where the Democracy Monument – seen as a heritage of the Khana Ratsadon or People’s Party – now stands.

The plan, however, was shelved due to budget constraints. King Rama VII’s statue was eventually constructed in 1969 in a new location – the Parliament. 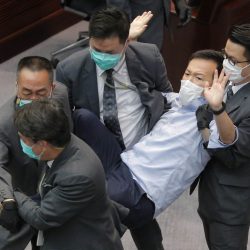