The government is planning to hold a party to thank all the people who were involved in the successful operation to rescue the 12 Wild Boars soccer players and their coach out of Tham Luang cave, Interior Minister Anupong Phaojinda said today.

Gen Anupong said the party is planned for several venues besides Bangkok, including Chiang Rai province where large numbers of people from all over the country and outside converged to lend their hands to the rescue mission.

He said he would consult authorities concerned before forwarding a formal proposal for Prime Minister Prayut Chan-o-cha to decide.

The Ministry of Natural Resources and Environment will play an important role concerning this matter as the area is being planned to be turned into a historical site, he said.

Meanwhile, a religious ceremony was held this morning at the entrance of Tham Luang cave to make merits for ex-navy SEAL member Saman Gunan who lost his life taking part in the rescue operation.

The ceremony was also intended to worship spirits that local people believed to be dwelling in the area of Tham Luang Khun Nam Nang Non forest park. Also in attendance were families of the 12 young football players. 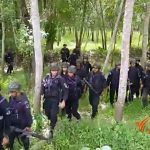