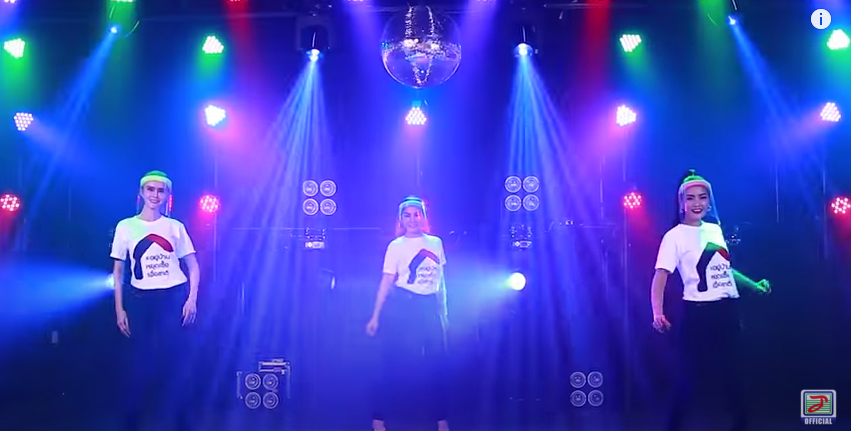 “This is no joke, the super spreader can hurt everyone,” warn the lyrics of a new Thai YouTube hit. “Covid comes with cough and fever. Step out of your house and you can catch the virus. People are dying or being rushed to hospital. If you love yourself and fear death, stay home now.”

“Super Spreader” is by the female trio Super Valentine, whose 2011 song “Super Valentine” recently became a huge hit on social media as locked down Thais began seeking the funny side of the crisis.

Video parodies of the original ear-catching tune, many of them by celebrities, flooded the TikTok social network as people looked for ways to pass the time at home.

The trio – better known as Jane, Noon and Bow – have revamped their hit with fresh lyrics to warn people about the dangers of the deadly virus. The new video is courtesy of a collaboration between Thai Media Fund and copyright holder Topline Music.

Listen to the “Super Spreader” here:

But “Super Spreader” is only one in a string of Covid-related tracks released by Thais over the past few weeks – mostly composed and performed by well-known artists.

As the deepening virus crisis crushes lives and livelihoods across the world, Thai musicians are working on lifting spirits – releasing songs of support for medics risking their lives in the battle against Covid-19 or advising on how we can protect ourselves in the outbreak.

About a dozen songs have been composed in praise of medical personnel who are working round the clock. They include “Nak Rob Sua Gao” (Warriors in Gowns) by Su Boonliang, “Huajai Si Khao” (White Hearts) by Pang Nakharin, and “Sua Wiset” (Magic Robe) by Mahidol University lecturers Chanokporn Puapattanakun and Rapee Boonplueang.

These numbers have already clocked up millions of views, with praise being showered on their composers for boosting people’s state of mind during this troubled time.

“I am happy to see such positivity. There’s been too much hate and scorn in social media, which is very depressing,” a YouTube viewer said of “Ja Mai Thing Kan” (We’ll Never Be Apart), a Covid-themed song written by star composer Boyd Kosiyabong.

Everyone is suffering the pain and sharing the same fate, they sing, and nobody knows when the crisis will end.

“However, this will unravel / Though we have to start from the beginning / You and I will never be apart.”

Among the more popular “contagion songs” is “Covid Sa Si Ma Kod Der” (I Will Hug You after Covid-19 is Gone), whose lyrics in Isaan dialect are sung by famous look thung songwriter Sala Kunawut. The official YouTube version has logged over 4.9 million views, but the easy-listening ballad has spawned at least a dozen more covers.

The lyrics evoke the sadness of a lost Songkran seen through the eyes of two lovers kept apart by the outbreak: “I love you but can’t see you now,” the man laments. “I miss you, but Thailand’s safety comes first.”

The song urges all Thais to join the fight together, so the crisis can be overcome. In the comments section, Ajintana Kuna Mogensen, who said she works as an ICU nurse in Denmark, thanked the composer for “this beautiful and encouraging song”.

“Wan Mai” (New Day), by singer-songwriter Pongsit Kamphee, was released on YouTube in late March and has racked up 3.5 million views so far. The composer said music was a potent tonic that can lift people’s spirits and help carry them through this tough time.

Pongsit explained the song is “a token of moral support for Thais in our ongoing fight against Covid-19”, adding “we will overcome this crisis together”.

YouTube user “Thanongsak”, a self-confessed decades-long fan of Pongsit, commented: “This song fits the current situation. Everyone is getting tired and disheartened. Let’s fight on and we’ll overcome [the crisis] together.”

“Don’t be selfish at this difficult time,” the lyrics go. “Let’s unify and get over this contagion together. If we Thais fight collectively … this nightmare will pass. A big hand for the doctors, nurses and all the anonymous workers.”

“I wrote this song in hospital. When everyone is terrified, the only thing I can do [for you] is sing songs and try to bring you happiness,” the singer-songwriter said. “I don’t expect this song to change the world. I just hope it brings a little spark of encouragement and makes everyone smile a little.”

Two other groups released new Covid anthems last week in a bid to strengthen camaraderie in this “dark, difficult time”.

Meanwhile Prombuak dedicated their new song, “Duay Kan” (As One), to the compassionate people who are helping compatriots hit hard by the outbreak and to medical personnel risking their lives to save Covid-19 patients.

“We believe all of us should help light up this darkness. It’s better than lashing out at the dark. We will get through this together,” the group commented on YouTube.

PM reaches out to Thailand’s 20 richest people for help 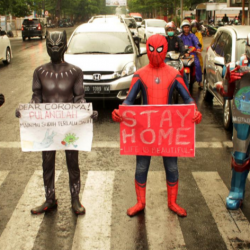