CCSA spokesman Dr. Taweesin Visanuyothin said today that the number of new COVID-19 cases, compared to recoveries, is a good sign, but noted the disturbing trend of increased infections among members of the same household.

Accumulated infections in Thailand so far are 2,643, with 1,497 recoveries and a total of 43 deaths.

Among the new cases were a Thai returning from the United States via Japan, who was diagnosed during their 14-day state quarantine.  Taweesin admitted that it is not yet clear where the patient contracted the virus.

Seventeen of the new infections were in close contact with those already infected, another had also recently returned from abroad and two had visited crowded places.

According to Dr. Taweesin, one was a 60-year old street food vendor who had diabetes, chronic kidney disease and high blood pressure.  She had been in close contact with an infected family member and was tested on March 17th. She was given the anti-virus drug Favipiravir, but died on April 13rd due to a severe lung infection.

The second victim was a 60-year old returning from a pilgrimage to Indonesia on March 24th.  He was admitted to a hospital in Ayutthaya province on April 2nd after developing a high fever and muscle pains.  His condition deteriorated and he was pronounced dead yesterday.

Dr. Taweesin said that infections among members of the same household in April have increased threefold, while conjecturing that the increased infection rate might be linked to the curfew, which has forced people to stay at home and in close contact with each other.

He stressed, however, the importance of social distancing and the wearing of face masks, even if people are sharing a living space.

The infection rate among those returning from abroad also increased in April compared, but the rate of out-door infections fell in the same period.

Regarding Thai people abroad who are waiting to return to Thailand, Dr. Taweesin said the Government would like limit the rate of returns to not more than 200 a day, to ensure there is sufficient accommodation available for their quarantine.

There are currently about 3,000 Thai Muslims waiting to return from Malaysia. Thailand’s Ministry of Foreign Affairs has opened an online channel for these people to register for the trip back home. 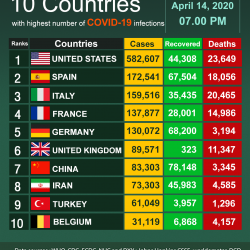 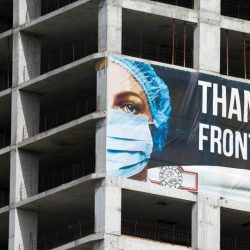