Thailand’s Election Commission has been asked, by political activist Srisuwan Janya, to investigate the conduct of the Progressive Movement, led by Thanathorn Juangroongruangkit, which he accuses of functioning like a political party.

Mr. Srisuwan, Secretary-General of the Association for the Protection of the Constitution, told the media today (Monday) that the Progressive Movement, co-founded by Thanathorn, Dr. Piyabutr Saengkanokkul and Ms. Pannika Wanich after the dissolution of the Future Forward Party, has been functioning like a political party, such as by convening meetings to select candidates for Provincial Administration Organization (PAO) elections in more than 40 provinces, under the name of the Kao Na Group (Progressive Movement), and the use of the group’s logo while the three of them help campaign for their candidates.

The conduct of Thanathorn, Piyabutr, Ms. Pannika and their associates, claims Mr. Srisuwan, amounts to a conspiracy of more than two people to undertake activities similar to those of a political party, which is a violation of Section 111 of the Political Party Act.

He explained that the Act was promulgated to ensure that all political parties register, so that they may be regulated, must comply with regulations and can be held accountable to the people if a party commits an offence.

“How can the Election Commission or the public check the conduct of political groups, which function like a political party, or how they spend the money for political activities, if they are not registered and regulated?” asked Mr. Srisuwan.

A conviction for violation of Section 111 of the Political Party Act is liable to three years imprisonment and/or a fine of 60,000 baht and the founders of political groups, found to be functioning like a party, will face a political ban of up to five years. 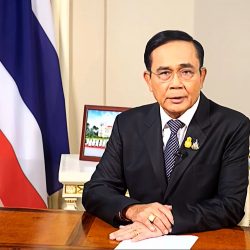