The COVID-19 new infection rate in Thailand has fallen for the fourth consecutive day, to 33 from yesterday’s 45, bringing the total to 2,551. Three new fatalities were reported, bringing the virus’s death toll in the country to 33.

Bangkok and neighbouring Nonthaburi province account for 1,427 cases, 334 cases in the rest of the central region, 95 cases in the North, 101 cases in the Northeast and 486 cases in the southern region.  The patient is 91-years old and the youngest is one-month old.  The 20-29 age group accounts for the majority of the infected.

CCSA spokesman Dr. Taweesin Visanuyothin said today hailed the declining infection rate as good news for the Thai traditional New Year, or Songkran, which starts today, but he cautioned that we cannot afford to drop our guard against the disease.

Dr. Taweesin attributed this trend to a combination of the curfew and the public following advice to stay at home and observe social distancing, adding that he would also like to see social cohesion, to be one unified force fighting the pandemic.

He said, however, that more stringent measures might be needed, citing the worrying trend of infections in other ASEAN member countries, such as Malaysia, Indonesia, the Philippines and Singapore.

According to the CCSA, one of the new fatalities was a 74 year old Thai diabetic man, with high cholesterol, who visited a crowded market and held gatherings at home.  He developed a high fever on April 1st and was admitted to hospital in Nakhon Si Thammarat province for treatment. On April 7th, his temperature rose to 39.4oC, accompanied by a stomach ache.  The patient tested positive for coronavirus on April 8th and was pronounced dead three days later.

The second victim was a 65-year morbidly obese woman with dyslipidaemia.  She reportedly went to visit relatives in Chumpon, from March 20th to 26th, after which she developed a cough, fever and fatigue.  She saw a doctor at Chumpon Hospital on April 1st, was prescribed medication and sent home.  Her condition deteriorated the following day and she returned to the hospital, where she tested positive for coronavirus and died yesterday.

The third case was a 44-year old Thai man with serious symptoms who, when admitted to a state hospital, was given dialysis treatment. His condition worsened and he subsequently died. 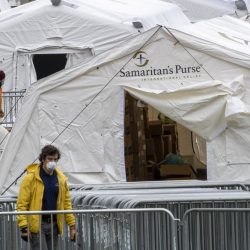 US coronavirus deaths top 20,000 with billions in Easter lockdown

COVID-19 boxing stadium cluster not result of carriers from Italy