The Centre for Medical Genomics at Ramathibodi Hospital has reported the country’s first case of the COVID-19 Omicron BA.2.75 sub-variant infection, in the southern province of Trang.

The case was found among several specimens collected for the Department of Medical Sciences on June 28th. The department conducted genetic sequencing and uploaded the findings to the GISAID database on July 18th. It was identified as the BA.2.75 sub-variant.

This sub-variant was first detected in India in early June and has spread to several other countries including the United States. Scientists had decoded the matching genetic makeup in 338 cases by yesterday (Tuesday).

According to the centre, the BA.2.75 sub-variant can evade immunity more effectively than other sub-variants and become resistant to vaccines, which were developed from the Wuhan strain of the virus. It is suggested that any synthetic antibody medication to be administered to patients must be tailored to match with their virus strain of infection.

It was observed that the BA.2.75 sub-variant, which spread rapidly in India, has now subsided, probably because many people in the country, who had been infected by the BA.2 sub-variant, may have developed some immunity.

Two BA.2.75 sub-variant cases have been detected in Singapore, in two passengers arriving from India on July 17th. Asymptomatic, both are now in quarantine.

The centre noted that the BA.2 sub-variant did spread widely in Thailand, before the arrival of the BA.4 and BA.5 sub-variants.

It also said that there is no clear evidence that BA.2.75 is more virulent or severe than the other Omicron sub-variants. 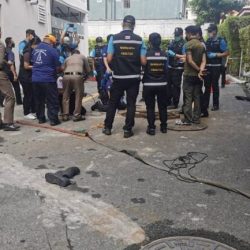