Thailand asks for smallpox vaccine from WHO

Thailand has asked the World Health Organisation (WHO) for support in providing smallpox vaccine, as a precautionary measure against Monkeypox, now that the country has eased travel restrictions for overseas arrivals from many countries, including those where Monkeypox has been detected.

The request for smallpox vaccine was conveyed by Public Health Minister Anutin Charnvirakul to WHO Director Tedros Adhanom Ghebreyesus during a courtesy call on the new director on Wednesday in Geneva. Anutin was in Geneva to attend the 75th World Health Assembly.

Thailand has no reserves of smallpox vaccine, because the virus was eradicated from the globe several decades ago. The last recorded naturally occurring case earth was in 1977.

During the informal meeting, Anutin also invited the WHO director to attend the official opening of the ASEAN Centre for Public Health Emergencies and Emerging Diseases (ACPHEED), scheduled to take place in Bangkok on August 25th.

The public health minister told the media yesterday (Thursday) that a technical committee of the Thai National Communicable Disease Committee has classified Monkeypox as a communicable disease under watch, although no cases have been detected in Thailand as yet.

He said that measures have been put in place to screen overseas arrivals from countries where Monkeypox has been detected.

Anutin also said that, while he was in Geneva, he witnessed the signing of an agreement on the sharing of COVID-19 related knowledge and resources between the Thai Department of Disease Control and the WHO with Thailand being designated as the core country for the WHO BioHub System.

Meanwhile, the Department of Disease Control has dismissed as a fake news a report that Monkeypox has been detected on Chang Island, off Trat province, and has appealed to the public not to panic.

The department added, however, that several people on the island have been found to be infected with Plasmodium knowlesi malaria, which can be transmitted from primates to humans via the bite of the striped mosquito.

As of May 25th the department said that 309 people in 22 countries have been infected with Monkeypox. 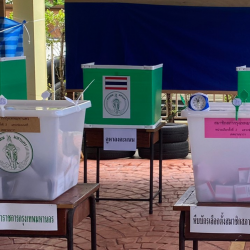