Thailand and the US began a two-day strategic discussion in Washington yesterday (Monday), to strengthen further their security partnership in creating a peaceful and prosperous region.

The strategic talks, which were planned in advance, precede the scheduled special ASEAN-US summit on May 12th and 13th, which will also be held in Washington. Thai Prime Minister Prayut Chan-o-cha will join other ASEAN leaders for the summit. He will be accompanied by Foreign Minister Don Pramudwinai.

The strategic dialogues have long been integral parts of Thai-US relations. This year will mark the first joint dialogue, as well as the first face-to-face dialogue since the start of the global COVID-19 pandemic two years ago.

Top of the agenda will be issues related to global challenges, including post-COVID-19 economic recovery and prosperity, health and law enforcement cooperation as well as efforts to combat the climate crisis.

Furthermore, economic relationships will be discussed, as the US is one of Thailand’s largest export markets and one of the largest sources of investment. The two-day meeting will reaffirm their long-standing treaty alliance, known as the Thanat-Rusk Communiqué, and partnership as a vehicle jointly to tackle shared challenges and achieve mutual goals.

The special ASEAN-US summit will built on what President Joe Biden pledged last October, when he announced US$102 million in new initiatives to expand US engagement with ASEAN on COVID-19 recovery and health security. Other commitments include fighting the climate crisis, stimulating economic growth, promoting gender equality and deepening people-to-people connections.

Biden will host a welcoming dinner for the ASEAN leaders at the White House on Thursday evening. On Friday, all the leaders, including Vice President Kamala Harris, will have a two-hour discussion on ASEAN-US relations.

Biden plans to announce its Indo-Pacific Strategy outlining his administration’s foreign policy vision and commitment to sustained and creative collaboration with allies, partners and institutions.

On the side-lines of the summit, Prayut, who is also Thailand’s Defence Minister, will have a scheduled meeting with US Defence Secretary Lloyd Austin to find further ways and means to promote closer security cooperation.

A joint vision statement will be released at the end of their meeting. 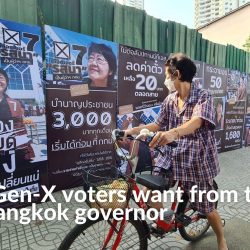 What Gen-X voters want from the next Bangkok governor