Thai Raksa Chart, a party recently formed to capitalize on young voters, has unveiled its four economic policies that emphasize application of new technology to cut costs, to increase revenues and opportunities, to speed up bureaucratic formalities and to promote creativity and innovation.

Former energy minister and currently chief economic advisor of the party Pichai Naripthapant said the party wants to promote the use of modern technology to bring down production costs and, at the same time, increase revenues and opportunities. He said the policy is similar to that of the now-defunct Thai Rak Thai Party once led by former prime minister Thaksin Shinawatra.

He claimed that he had warned the incumbent science and technology minister some time ago that Thailand might lag behind other countries if the government leader lacks vision and foresight.

He said Thai Raksa Chart has attaches importance to the use of modern technology and the development of on-line applications in supporting economic development.

The former energy minister claimed that the coding policy for Thailand, which is anther economic policy initiative of the party, would change the face of Thailand by opening up the door to allow resourceful people to participate in the use of technology to reform the country in various aspects.

For instance, he said the coding system in medical care services could shorten the usually long queues of people waiting for their turns to receive medical services at state hospitals or foreign migrant workers waiting in long queues to apply for work permits.

He said the party’s another economic policy is for the country to be open to not just local talents but also talented foreigners to join in the development of technological creativity and innovations.

However, he noted that the current computer crime law needs to be overhauled to make it conducive to the promotion of technological development instead of being used as a tool for political intimidation as has been the case.

Pichai said the party would also seek to change the energy price structure and to get rid of monopoly in energy business so that the people could have access to energy at reasonable and fair prices.

Besides the four economic policies unveiled, he said the party has more policies under its sleeve which will be announced later on. 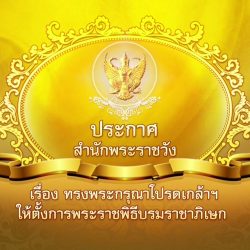