This frame grab from video footage taken on September 3, 2012 and received from Thai PBS via AFPTV on September 1, 2020 shows Red Bull heir Vorayuth “Boss” Yoovidhya leaving Thong Lor police station in Bangkok, after he was summoned following a hit-and-run case which resulted in the death of a police officer. – The case against the Thai heir to the Red Bull billions accused of a fatal hit-and-run was “compromised” from beginning to end, the premier’s office said on September 1, 2020, calling the entire procedure “dishonest”. (Photo by various sources / AFP)

Thai public prosecutors have expressed concern that they may not be able to indict Red Bull heir, Vorayuth “Boss” Yoovidhya, on a drug abuse charge before the time allowed under the statute of limitations for the offence runs out in the next eight months.

The use of cocaine is one of the two remaining charges still pending. The other charge is reckless driving causing death, which is due to expire on September 3rd, 2027. Time allowed under the statute of limitations on three other charges has already expired.

Public prosecutors in charge of the case have said they are yet to receive information from the police regarding the suspect’s exact location abroad, which is a basic requirement for the extradition process. The statute of limitations on this case will expire on September 3rd, 2022.

Meanwhile, Thai Interpol chief Pol Maj-Gen Khemarin Hatsiri told Thai PBS that they have been coordinating with Interpol to help track down the fugitive, Vorayuth. A “Red Notice” has been issued by the Interpol to its member countries for his arrest.

He said that Interpol have asked his office to provide them with updated information, such as his exact location, which may have changed, and the passport used, adding that additional biometric information has also been sent, which may assist in tracing his whereabouts.

Vorayuth, the grandson of billionaire Chaleo Yoovidhya, the co-creator of Red Bull drinks, was involved in a fatal road accident in Bangkok’s Thonglor area on the night of September 3rd, 2012. His Ferrari allegedly struck a motorcycle being ridden by police officer Wichian Klanprasert, who died at the scene.

All charges against Vorayuth were dropped by prosecutors in mid-2020. Public outrage ensued, forcing the Office of  the Attorney-General to revive the investigation and the processing of the charges for which statute of limitations has not yet expired. 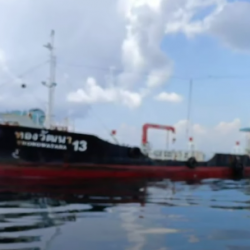