Thai people and foreign visitors went to the Grand Palace earlier today, to offer their condolences to the late Queen Elizabeth the 2nd. Her portrait has been displayed at the palace’s Manee Nopparat Gate since Monday. The portrait will be displayed until September 25th, to allow the public to pay their final respects.

The Supreme Court found former Deputy Prime Minister Suthep Thaugsuban not guilty of corruption in connection with the Royal Thai Police’s project for the construction of 396 police stations.

Arrest warrants have been issued for six more suspects, wanted by police in Nonthaburi for an assault on a 16-year-old boy, who was abducted at gunpoint from a motorcycle repair shop last week. One of the gang members was allegedly shot by another and is currently being treated at a hospital in Pak Kret district.

Thai military forces based along the Myanmar border in the northern province of Chiang Rai have stepped up border surveillance, especially in Mae Sai district, to prevent the smuggling of a new narcotic, known locally as “Happy”, from Myanmar’s Ta-chi-lek township.

The drug has not yet been found on the Thai side of the border, but local officials have also stepped up road checks for suspicious cars or people who may try to smuggle the drug into the country. 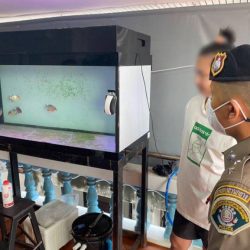