The mango sticky rice craze continues in Thailand, after female rapper, Danupha “Minnie” Kanateerakul, a.k.a Milli, ate the Thai dessert during her performance at the Coachella event last weekend. This has prompted diplomatic missions in Thailand to join in.

The US embassy in Bangkok posted an edited photo of Mount Rushmore, depicting the four sculptures of the former presidents of the United States carved into the granite staring at a plate of mango sticky rice. The photo was posted along with the caption “The U.S. Embassy is thrilled to see our favorite Thai dessert trending after #Coachella2022. These former Presidents also want a bite of this “mangonificent” combo!”

The Swedish embassy also posted a video clip of their Ambassador to Thailand, J, trying mango sticky rice while asking people how to enjoy the dessert correctly. He said in the video that it was delicious and rated it 9 out of 10.

The Royal Thai Embassy in Helsinki in Finland also posted an online flyer encouraging youngsters to participate in a video contest, on the topic of “Mango Sticky Rice in my version”, in Finnish, English, or Thai. The winner will get a chance to work with the Embassy to produce video clips to promote Thai art, culture and lifestyle in Finland.

Meanwhile, the Tourism Authority of Thailand posted a photo of the Thai dessert, describing how this “iconic” dessert is now “enjoying the global limelight” after Milli’s performance at Coachella. It also stated that “back in 2018, the dish was listed by CNN Travel as one of the World’s 50 Best Foods” and that the dish is perfect for summer.

Since Milli’s performance, mango sticky rice has rapidly grown in popularity and is selling like hot cakes in some markets in Bangkok and elsewhere in Thailand. The Thai Cultural Promotion Department plans to apply for its listing as part of the country’s intangible cultural heritage. 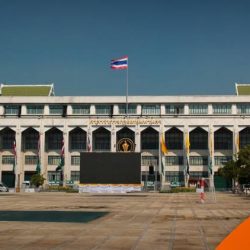