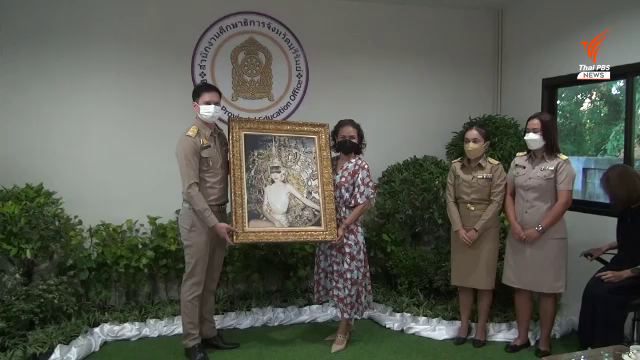 Thai-born K-pop star Lalisa “Lisa” Manoban of the girl group “BLACKPINK” was given an honourary award by her hometown of Buri Ram’s Provincial Education Office on Tuesday, for her contribution to education in the province and her role as an example and inspiration for youth.

The award was in return for her sponsorship and founding of a K-pop learning centre in the province, as well as for helping a local school to get support from a Korean foundation by arranging a cultural exchange program.

Lisa’s mother, Chitthip Bruschweiler, accepted the award on her behalf.

The head of the education office expressed his appreciation for Lisa’s contribution, saying the Buri Ram native had succeeded at the international level, but has never forgotten where she came from. The K-pop rapper and dancer has become a role model for local children, he added.

The Korean Times has reported that Lisa is interested in creating a cultural space in Non Suwan Pittayakom School in Buri Ram. In addition to the K-pop learning centre, the star also has a plan to donate more equipment, such as computers and projectors, to the school in a bid to facilitate performing arts education.

The Thai tourism authorities were previously planning to invite Lisa, along with Italian opera singer Andrea Bocelli, to perform at the New Year countdown celebrations in Thailand. South Korea’s YG Entertainment, Lisa’s employer, announced in late October that the Thai star cannot join the event due to other commitments.