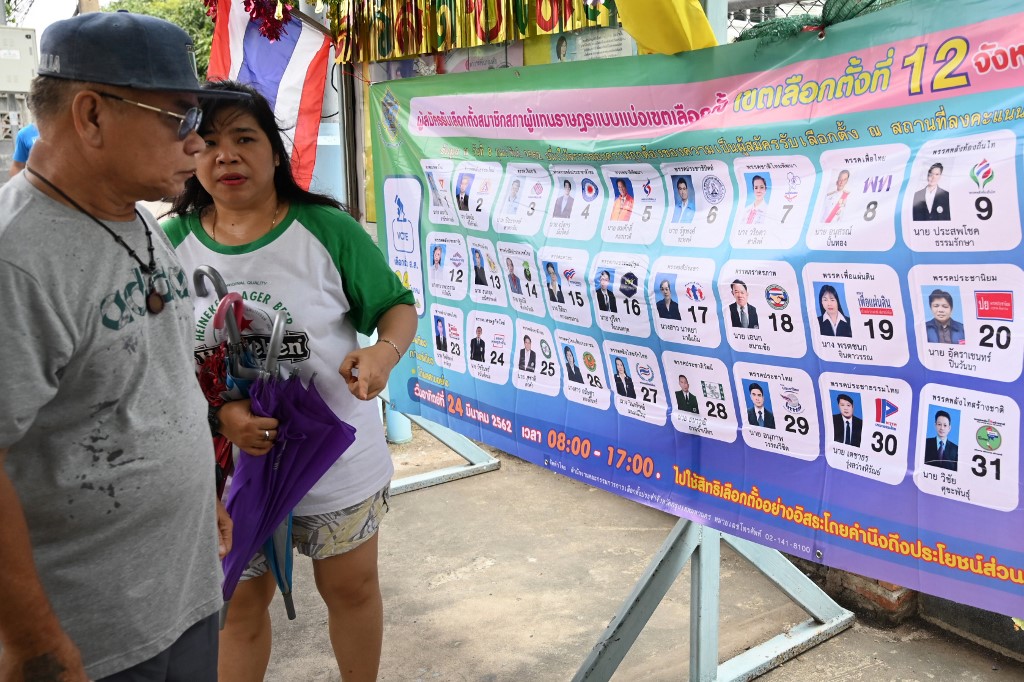 A man looks at a banner of candidates in the general election displayed at a polling station in Bangkok on March 24, 2019. (Photo by Ye Aung THU / AFP)

A widening rift between coalition partners Palang Pracharath and the Democrats over the upcoming Nakhon Si Thammarat by-election is threatening to undermine the government’s stability.

After falling out over several issues, relations between the two ruling parties now appear increasingly shaky.

The March by-election was called after the Constitutional Court terminated Democrat politician Theptai Senapong’s status as a Nakhon Si Thammarat MP on January 27 because he was sentenced to two years in jail for election fraud. The provincial court also stripped him of electoral rights for 10 years.

The Democrats are looking for a candidate to contest the by-election, but Palang Pracharath leader Prawit Wongsuwan has said his party will also field a contender.

Obviously disturbed by Prawit’s announcement, senior Democrat figures pointed to a tradition among coalition allies of not fielding candidates for the same MP seat, especially if it was previo usly held by a coalition partner.

Democrat deputy leader Nipon Bunyamanee, who also serves as deputy interior minister, said he expected his party to “have a talk” with Palang Pracharath about the matter.

“Coalition parties do not contest against one another in a constituency won by a fellow ally. We will soon find out if this principle still stands,” Nipon said.

He also pointed out that the Democrats declined to field candidates against Palang Pracharath contenders in the Khon Kaen and Kamphaeng Phet by-elections.

“We showed respect for others and political etiquette,” he added.

Nipit Intharasombat, another Democrat deputy leader, said Palang Pracharath should be aware of this tradition.

However, Prawit, who also serves as deputy prime minister, disagreed: “This is about democracy. Any party can field their candidate. It has nothing to do with etiquette.”

He also thought the matter would not sour ties between the coalition parties.

Senior Democrat Wittaya Kaewparadai has a different view. He said his party should walk out unless the electoral tradition of deferring to allies is honoured, adding that such customs are key to ensuring the government’s stability.

He also called on Prime Minister Prayut Chan-o-cha to “deal with this problem himself before it is too late”.

“If everyone is allowed to contest for the same seat, then this government’s days are numbered,” Wittaya warned.

Major coalition parties avoided competing against one another in the past four by-elections, resulting in wins for them all.

The court sentenced each brother to two years in jail and banned them from elections for 10 years. Theptai and his brother appealed the case.

One month later, the Election Commission asked the Constitutional Court to rule on Theptai’s MP status, citing charter clauses that prohibit any person deprived of electoral rights from contesting an election.

After Nakhon Si Thammarat, Bangkok is set to be the next battlefield in the turf war between the Democrats and Palang Pracharath.

The city’s first gubernatorial election since 2013 is expected to take place in the second half of this year. All local elections were suspended after the military coup in 2014.

The battle for the Bangkok governor’s post is an opportunity for the Democrats to test their popularity among the city’s voters. In the 2019 general elections, Thailand’s oldest party failed to win a single MP seat in the capital, reversing their domination in previous polls.

In contrast, Palang Pracharath – which was formed only shortly before the election – won 12 out of 30 MP seats in the capital.

Bangkok’s last two governors since 2004 were Democrats. The incumbent, Aswin Kwanmuang, was promoted following the 2014 coup after serving as deputy to his predecessor, fellow Democrat Sukhumbhand Paribatra.

Palang Pracharath is unlikely to contest the governor election officially, but at least one independent candidate is expected to get unofficial backing from the party. 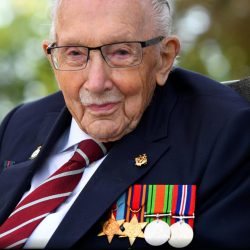 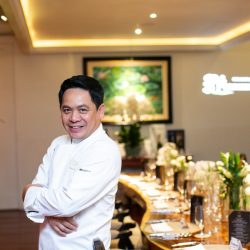 “Thai food is the most  delicious medicine” - Chef Chumpol