The second autopsy conducted on the remains of drowned TV actress Nida Patcharaveerapong, aka “Tangmo”, has confirmed the presence of 22 wounds on her legs, but did not find any broken teeth, fractured bones or wounds to her face or head.

These findings address some of the 11 suspicious points raised by Nida’s mother and were disclosed today by the Justice Ministry’s Central Institute Forensic Science (CIFS), whose pathologists conducted the second autopsy.

Thanakrit Chit-areerat, secretary to the justice minister, told a press conference today (Thursday) that the CIFS had responded to most of the issues raised by Nida’s mother.

Some, however, could not be addressed due to the condition of Nida’s remains.

He also said that most of the clarifications or findings related to the points in question were in writing addressed to the mother. He added that the Justice Ministry had the consent of the mother’s lawyer to disclose to the media certain parts of the autopsy reports.

CIFS Deputy Director, Asst. Prof. Dr. Worawee Waiyawuth, maintained that the first autopsy, conducted by the Police General Hospital’s Institute of Forensic Medicine, was up to standard adding, however, that the second autopsy focused on the 11 matters raised by the deceased’s mother.

CIFS Director Pol Col Songsak Raksaksakul said that the second autopsy was beneficial because it has addressed to most Nida’s mother’s suspicions. He said autopsy reports had been sent to Nida’s mother, but the police could exercise its authority under the law to ask for the report.

The second autopsy was performed on March 17th and the findings include:

• No traces of wounds on the head
• No wounds found on the face
• No wounds in the neck which might have suggested strangulation
• The burn wound on the chest was examined.
• Reports on the 22 cuts to the legs and wounds on foldable joints have been made.
• No wounds found on the back of the deceased
• Reports on examination of the wind pipe and genitals of the deceased have been made.
• Finger nails were clipped for re-examination.
• Clothes worn by the deceased during the 2nd autopsy were different from those worn on the day of her death

The lawyer, Decha Kittivittayanan, who was present at the press conference, said he will consult the police handling the case about the autopsy findings, as to whether they are useful to the case or not, adding that the second autopsy results do not contain significant variations from the first, except for the 22 small wounds found on the leg, about which, he said, he will have to consult forensic experts.

The 37-year-old actress fell into Chao Phraya river on February 24th while on a private speedboat trip with her friends and drowned. With a little progress into the case that has seen two people charged with negligence, the case has captured the country’s attention especially on the unusual circumstances surrounding the actress before her death and conflicting testimonies by her friends that led to suspicions of foul play. 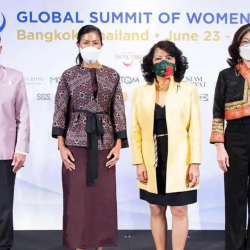