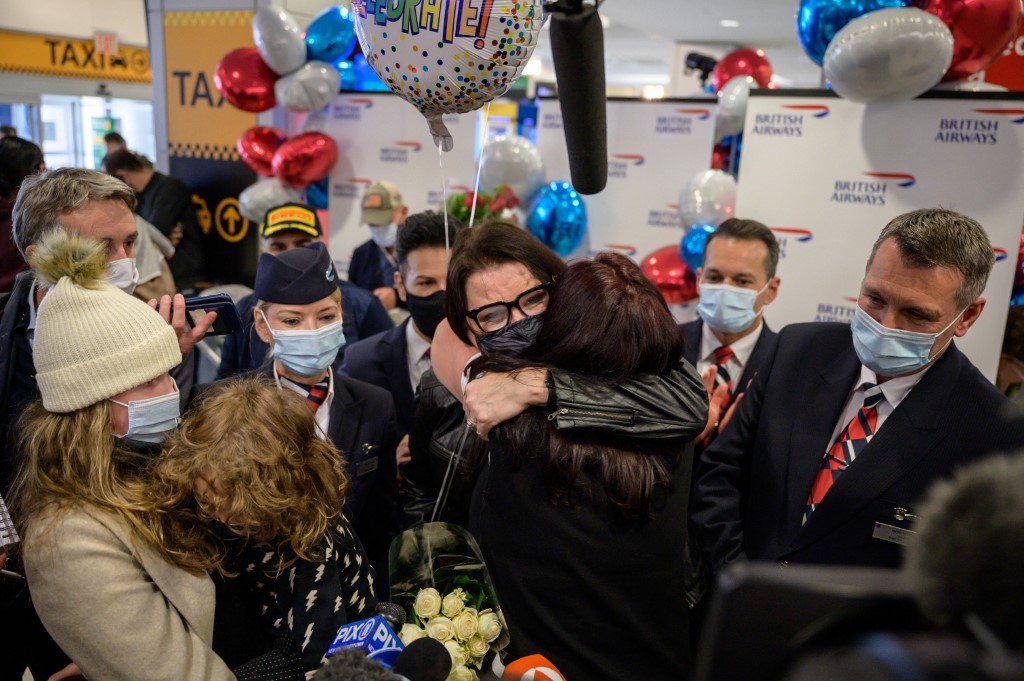 Members of the Erebara family embrace after being separated before arriving on a flight from the UK, following the easing of pandemic travel restrictions at JFK international airport in New York on November 8, 2021. (Photo by Ed JONES / AFP)

At airports and other US ports of entry, reunited relatives hugged as many met for the first time since the coronavirus swept the globe, leaving more than five million people dead and devastating economies.

In Europe, passengers lined up excitedly at airports to board planes bound for American cities, while those entering the country by land — some lugging suitcases or pushing bag-filled strollers under the watchful eyes of border patrol agents — faced hours-long wait times.

Smiling passengers from the first European flight to land under the new rules at New York’s John F. Kennedy International Airport entered the terminal to cheers and applause.

As soon as she spotted her son at the New York airport, Alison Henry rushed towards him and gave him a long hug, tears welling up in her eyes.

“I just can’t believe it, two and half years!” Henry, 63, said after stepping off a flight from London.

The ban, imposed by then-president Donald Trump in early 2020 and upheld by his successor Joe Biden, had become emblematic of the upheavals caused by the pandemic.

Trump initially closed US borders to travelers from China in February, 2020.

A month later, he extended the ban to large swathes of the world, including the European Union, Britain, India and Brazil, in an effort to slow the spread of the virus.

Overland visitors from Mexico and Canada were also banned.

At London’s Heathrow Airport, two planes from rivals British Airways and Virgin Atlantic heading to New York took off at the same time from parallel runways to mark the occasion.

To cope with surging demand, airlines have increased the number of transatlantic flights and plan to use larger planes.

Louise Erebara was waiting at JFK for the arrival of her only sister and brother-in-law.

The women had not seen each other in 730 days, said Erebara, who admitted she would “cry hysterically” upon seeing her sister.

“It’s been terrible not knowing when we were going to see them again due to Covid, not knowing if the borders were ever going to open,” she said.

Along the US-Mexico border, many cities have faced economic struggles due to anti-Covid-19 trade restrictions.

But there was little criticism of the border closures among those waiting to enter the United States on Monday.

“Well, because of the disease, it was necessary,” said Herminia Urieta, who traveled for three days from Guerrero, in southern Mexico to visit a sister she has not seen since the beginning of the pandemic.

Reflecting widespread anticipation of the reopening, currency exchange centers in Mexico’s Ciudad Juarez were hit by a shortage of dollars.

To the United States’ north, Canadian retirees known as “snowbirds” headed across the border in droves, fleeing winter weather to Florida and other balmy climates.

“We have butterflies,” said Daniel Francoeur, who along with his wife waited almost seven hours to cross the Thousand Islands Bridge into New York state after leaving their Ottawa area home at 1:30 am.

“It’s been two years since we went to Florida and we didn’t want to wait another day,” they told AFP from their car.

Lifting the travel ban will affect more than 30 countries, but US entry will not be unregulated.

Starting Monday, vaccines will be required for “non-essential” trips — including family visits or tourism — although unvaccinated travelers will still be allowed in for “essential” trips.

A second phase, beginning early January, will require all visitors be fully vaccinated to enter by land.

US health authorities have said all vaccines approved by the US Food and Drug Administration and the World Health Organization would be accepted for entry by air.

Despite concerns over increases in Covid-19 cases in some countries, including a recent upswing in Europe the WHO warned could mean “another half a million Covid-19 deaths” by February, many on Monday only expressed relief at America’s reopening.

For 63-year-old Mexican grandmother Isabel Gonzalez, her 20-month wait to hug her San Diego-based children ended Monday when she walked from Tijuana into California.

“Thank God we are here,” she said.

It was the first time Gonzalez had spent so long apart from her children and grandchildren.

“But now we are here to eat pizza and McDonalds,” she laughed. 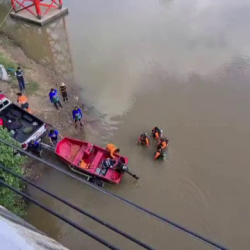 Car found in Chao Phraya River in Nakhon Sawan, to be recovered today 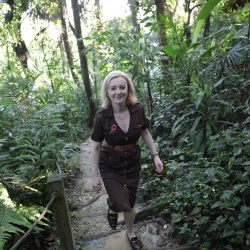