A taxi driver was injured by a knife wielding assailant and lost control of his vehicle, which then crashed into several cars and a motorcycle, after an apparently mentally unstable man got into his taxi and started stabbing him with a knife and a sharpened iron rod.

The incident took place Tuesday morning on Charunsanitwong road in the Thon Buri area, when a man went berserk as he sprinted out of Soi Charunsanitwong 23 into the road, which was jammed with heavy traffic.

The man tried to open the doors of several cars, but found them locked. He kept running from one car to another until he found a taxi and successfully got into the backseat.

The cabbie, who was not identified, later told the police that the stranger, who appeared to be mentally unstable, then started stabbing. He said he fought to fend off the attacker until he lost control of his car.

The force of the impact with the motorbike flung the rider over the car in front, landing on the windscreen.

The taxi driver said he managed to get out of his car, while his assailant remained inside and reportedly harmed himself with his knife. Police soon arrived at the scene and managed to restrain the man and took him to a nearby hospital for medical treatment.

The cabbie was only slightly injured, but the motorcycle was heavily damaged. 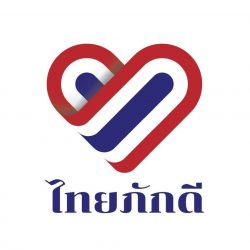