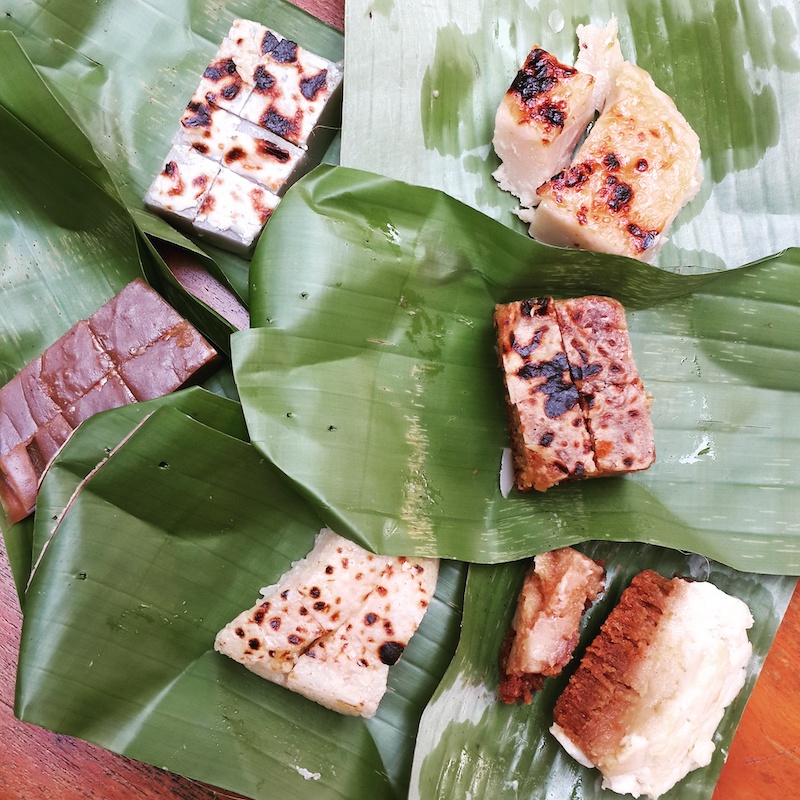 Tai Yai or Shan people are a predominant ethnic group in Mae Hong Son province north of Thailand. That makes the foods in this small, misty town unique and delicious. Here is the link to the full story. Enjoy!

I know what I am writing here is only the tip of the iceberg. Food migrates and we inadvertently and continuously adopt nearby cuisines and take them into our own repertoire. And with this, I am recalling my first experience munching on a Burmese rice noodle called ‘Mohinga’ — mind absolutely blown. The rice noodle looks not too different from a Thai rice noodle, but there’re some subtle differences that make the dish not our own. Something so close, and yet so far. 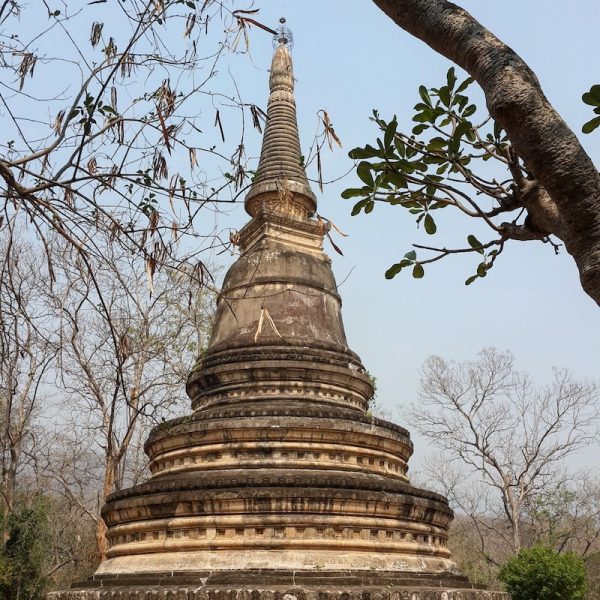 A trip to Mae Hong Son north of Thailand unveiled yet another eye-opening episode of ethnic food exploration. Mae Hong Son is known as a province far-far-away of the northern highlands. Set deep in the layered valleys, Mae Hong Son is known for being a shadowy and misty town. Thousands of curves and switchbacks, if you are to drive, await on the road. Patience, and the ability to withstand hours of constant motion sickness are required, even when you are in your own sedan, as it had proved to be for me. 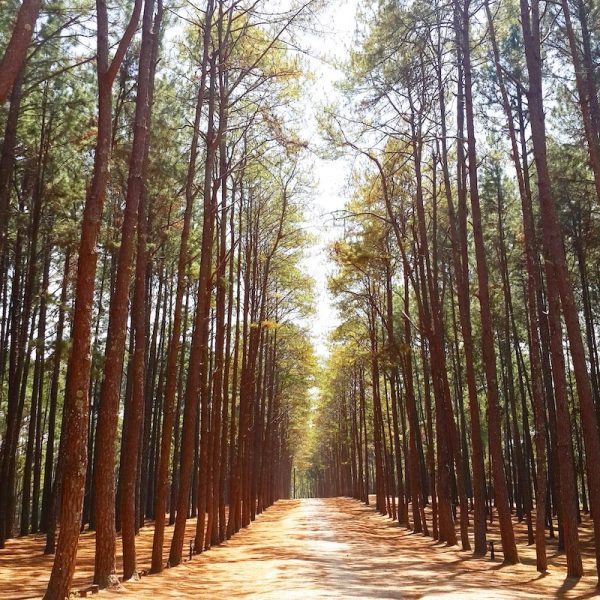 Tai Yai or Shan people are a predominant ethnic group in Mae Hong Son. Here, the Thai northern dialect change a bit, and the names of the food are just as bewildering. The place to witness it all is at their morning fresh market called ‘Talad Sai Yood’ in the centre of the town. At first glance, this market might look just like any other fresh markets in provincial Thailand. But looking closer, one can immediately detect the differences. Trays of steamed desserts, some with gratin tops, look pretty much like any tray desserts found elsewhere in the country. But their names – from ‘A-la-wa,’ and ‘Peng-Mong,’ to ‘Suay Tamin’ and A-la-wa Jung’ – all does not make any sense to me.

It turns out that despite the names, these desserts are not that different from Thai tray desserts. They are made from flours, coconut milk, and sugar. But there are some variations in those ingredients. The flour can be sticky rice flour or wheat flours, and sometimes butter and milk are also added. Tasting it, I found, again, that they are not the same as Thai desserts I know, but they are not that different either.

Breakfasts here are also vibrant. This is where I first experienced ‘Tua Pu Oon’ or the native chickpea soup. The thick and sweet broth of the chickpea soup is served with chewy rice noodle, topped with crispy-fried tofu, cilantro and toasted chillies. The combination is unfamiliar, but the taste is just awesome. Clean-tasting even. It is a savoury dish, but without meat as the mainstay, it is just great to start the day with. You can, of course, add as much as toasted chillies as you like. Chickpea, as I learn from this market, is a staple ingredient in Tai Yai kitchen. The same chickpea paste is also made into steamed pudding. Cut into pieces and the chewy bites are mixed with sauce and make another unique breakfast item. 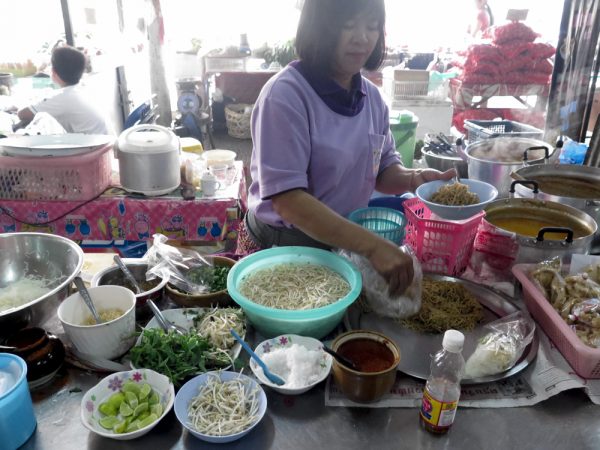 There are some heartier dishes of Tai Yao that locals eat from morning until lunchtime. They are not too different from the versions I had eaten in Chiang Mai, but somehow, knowing that these bowls are in fact derived from Shan kitchen make them all more special.

Gaeng Hung Lae – spicy and sour meat-based thick curry is prominent with chunky meat and ginger. And the spices that makes this bowl unique and particularly delicious. Also typical to this part of the country is ‘Ok Gai’ in which the word ‘Ok’ or sometimes ‘Op’ that means stewing, usually with tough parts of the meat. The result is a thick and delicious curry of tenderised meat of one kind.

It is here that I found a closer similarity of what I knew about Thai northern foods and the foods of Tai Yai. The curries are almost the same. Same names, same ingredients. A meal here is to be complete with a small bowl of chilli paste, usually made from red dried chillies and galangal. But instead of eating everything with sticky rice as Chiang Mai people prefer, these Tai Yai descendants prefer steamed rice, which for me, is equally hearty and delicious. 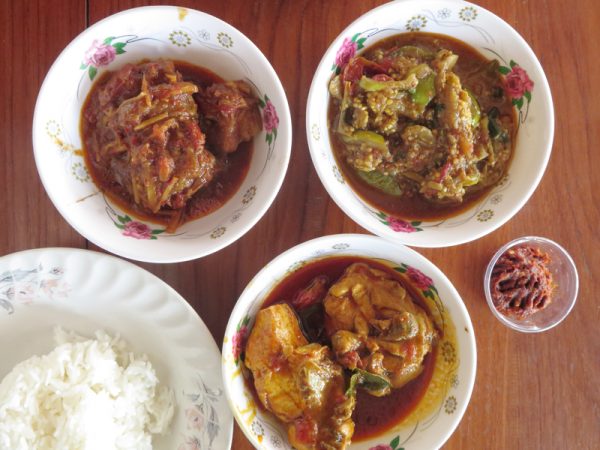 Mae Hong Son is one of my favourite northern provinces, thanks to their foods and natural sceneries. This is a quiet town, still largely untainted and just perfect. But avoid the months of March and April when the locals, despite the efforts to stop, still continue to burn the forests in massive efforts, in parts to pave for the new crops. That will be the time of dust and fumes, and you don’t need to inhale all those things. 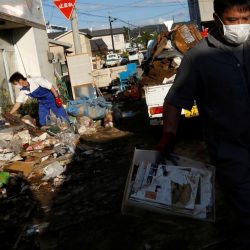 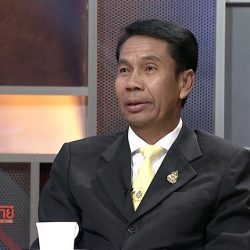 Opposition may support budget bill if Government acts on their recommendations