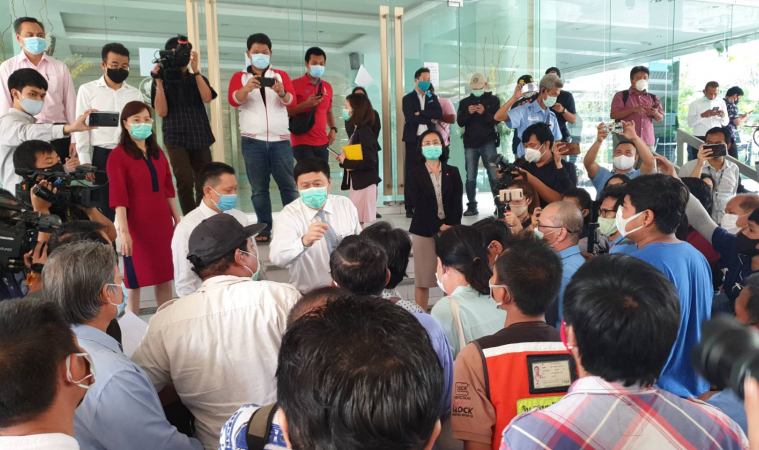 Some of the people who had their applications for the 5,000-baht cash hand-out from the government rallied in front of the Finance Ministry on Tuesday. / Photo from thaipost.net

Deprived of customers by the lockdown, motorbike taxi driver Somboon Kongka turned in desperation to the Bt5,000 subsidy scheme launched by the government to help people through the Covid-19 outbreak.

Yet despite being in an industry earmarked for the monthly handouts, Somboon received an SMS message rejecting her registration because “she is a student”.

This confused Somboon, who is also president of the Four Region Slums Network. While she admits to taking informal classes so she can learn how to help develop slum communities, this hardly makes her “a student”.

“In the end, the government’s AI [artificial intelligence] decided she is a student and not eligible for financial help,” the message posted on the page read. “This AI doesn’t know the poor.”

The government has rolled out a series of stimulus packages designed to ease the impact of Covid-19 on workers. Among them are monthly payments of Bt5,000 from April to June to aid around 9 million informal and self-employed workers who are not covered by social security.

Registration for the scheme at www.เราไม่ทิ้งกัน.com (Rao Mai Ting Kan) began on March 28 and will run until there are no more applications.

Authorities said applicants will first be screened by AI to check if they meet the criteria set by the Finance Ministry. They will then receive a message of confirmation or refusal. Those who are found to be eligible will have the money transferred to their registered account within seven days. The first batch of payments was delivered on April 8.

Applicants deemed ineligible are being removed from the list, and if they happen to get the aid anyway, the money will be taken back.

The Rao Mai Ting Kan website opened for registrations on March 28 and then almost immediately crashed as millions tried to gain access. However, 8.5 million people did manage to register on the first day.

Since its launch, complaints have been rising – most coming from people who thought they were eligible for the aid but were disqualified. Many have turned to social media to question the government’s AI screening process and the system it uses to decide whether applicants qualify.

Among the complaints is that the poor and the elderly with no tech knowledge or internet access are having to pay others to register for them.

Others said that despite being eligible for the aid, their applications were denied because the software misidentified them as farmers.

“I work as an informal worker and my employer shut down the business, but an SMS notified me I had been disqualified [for the Bt5,000 payments] because I’m a farmer. Why can some people who weren’t employed before the scheme was launched get the money?” Facebook user Navaporn asked.

Wiroj Lakkhanaadisorn, spokesperson for the Move Forward Party, said the screening and selection process was failing to identify poor people who needed help. He also urged the government to rejig the scheme so all 14.5 million affected informal-sector workers can receive assistance.

“All informal workers are affected [by the deadly virus] so the government should help them all, not just a select few. The criteria to select applicants is far too generic. The government always emphasises that it uses AI [in the selection process] but to help people you have to smash the AI and use your heart,” he added.

However, Somkid Jiranuntarat, the Digital Government Development Agency expert who designed the Rao Mai Ting Kan website, explained that AI was not being used to screen applicants, but to check if they are eligible based on the state database.

“The screening process is done with the state’s close involvement and control. But sometimes the information in the database may not be complete, which then triggers doubt about the applicant’s eligibility and that can result in the person getting rejected,” Somkid explained in a Facebook message on Sunday.

“I can confirm that our AI checking system makes no mistakes. We do not identify people as farmers or students to reject their applications for financial aid. But our system has found [such identifications] in the database of state agencies,” said Fiscal Policy Office director Lavaron Saengsanit.

As of April 12, more than 27 million people had registered for the package and 7.99 million had been screened. Of these 7.99 million, 1.68 million were deemed eligible, 1.53 million were required to submit more information and 4.8 million were disqualified, according to Lavaron. The rejected applicants can appeal from April 19.

Referring to complaints from some applicants that their occupations had been misidentified, Lavaron asked them to check whether they had previously registered as farmers.

Normally, farming families register annually with government agencies to seek state subsidy. The head of family will complete the registration process by identifying all the family members.

Those disqualified from the Bt5,000 scheme may have been registered as a member of a farming family, explained Lavaron. 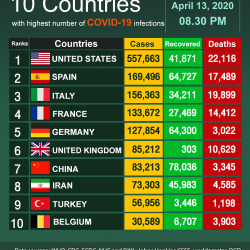