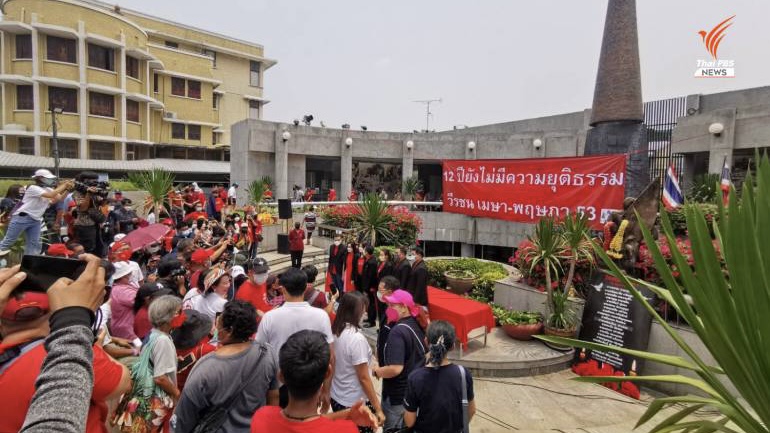 Followers of Thailand’s United Front for Democracy against Dictatorship (UDD), aka “the red-shirt movement”, representatives of opposition parties and core members of the country’s anti-establishment groups gathered yesterday (Sunday) at the October 14th Memorial, on Ratchadamnoen Avenue in Bangkok, to commemorate the 12th anniversary of the violent crackdown on red-shirt protesters of April 10th, 2010.

At least 90 people died and more than 2,000 were wounded in clashes between security forces and UDD-led anti-government protesters, according to Human Rights Watch.

A red banner displaying the message “12 Years, but still no justice for the heroes of April-May ‘53 (2010)” was hung at the site of the event.

The event started with the chanting of prayers by nine monks and a merit making ceremony for the  red-shirt protesters allegedly killed by government forces during the crackdown, as their names were read out. Wreaths were laid in memory of those who died.

Addressing the participants, Nattawut said that the holding of the commemorative event was not intended to drive a wedge between people who share different political opinions adding, however, that whoever ordered the crackdown against the red shirts has not yet been held accountable.

He said that, 12 years ago, red-shirt followers, who are mostly poor and at the lower end of Thai society, took to the streets in Bangkok to demand democracy, liberties and equal rights, but they were met by violent crackdown.

“We have been fighting for more than ten years and we are still here. We are not tired. We do not feel pain and we will not give up,” said Nattawut.

The participants sang a song in praise of those they regard as fallen heroes, as they raised their three-finger sign of defiance, after which, they laid wreaths and flowers at the memorial site.

Some of the demonstrators moved to the nearby Democracy Monument for a brief rally.

In the north-eastern province of Khon Kaen, a religious ceremony was also held, at the shrine of the city’s deity, in Muang district, by red-shirt followers in memory of the victims.

Back in March 2012, the UDD held protests at Phan Fa Lilat Bridge and Ratchaprasong intersection to demand that then prime minister Abhisit Vejjajiva dissolve parliament.

Events escalated when the red shirts clashed with the military. Dozens died in the clashes between March-May 2012, including a Reuters journalist, Hiro Muramoto, and photojournalist Fabio Polenghi. 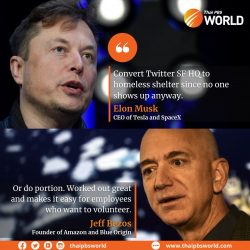 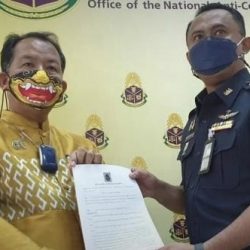