The collapse of three Thai House of Representatives meetings this month alone, due to the lack of a quorum, has drawn widespread criticism for allegedly improper conduct by dissident MPs, especially among the Opposition.

The Kla party, led by Pongpol Yodmuangcharoen, lodged a petition signed by 8,000 people and addressed to House Speaker Chuan Leekpai yesterday (Thursday), urging him to take disciplinary action against MPs who refuse to turn up at or officially declare their presence at House meetings, resulting in insufficient numbers to make up the quorum.

Pongpol said that the Kla party launched a campaign after the 14th House meeting collapse to solicit support from members of the public for the party’s proposal to do something concrete and definitive to deal with conduct unbecoming of the people’s representatives.

The party’s proposed disciplinary action, including warnings, salary cuts for the day or days on which an MP refuse to declare their presence at a House meeting or depriving them of the right to vote or to join the debate, and even the right to run in the next elections if they are absent in more than half of all the meetings.

Leader of the staunch royalist Thai Pakdee party Dr. Warong Dechgitvigromsaid in his Facebook post that yesterday’s collapse of the meeting was the 17th in the past year.

He alleged that the refusal by some MPs to declare their presence at House meetings is a political gambit and is not for the benefit of the people, as he warned that the people may, one day, rise up to protest that the House is a waste of taxpayers’ money.

Asst. Prof. Dr. Pathompong Bodhiprasiddhinanand, a lecturer at Mahidol University, wrote on Facebook yesterday that the refusal of MPs to attend House meetings or to declare their presence at meetings amounts to a form coup by politicians, because they may feel that the parliamentary system is not delivering what the vested interests yearn for.

Former deputy director of the National Intelligence Agency, Nantiwat Samart, warned the “rogue” MPs that the people may become fed up with them and will teach them a lesson in the next election.

He warned that people may lose faith in the electoral and democratic system if MPs continue to play political games in parliament. 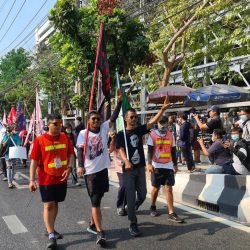