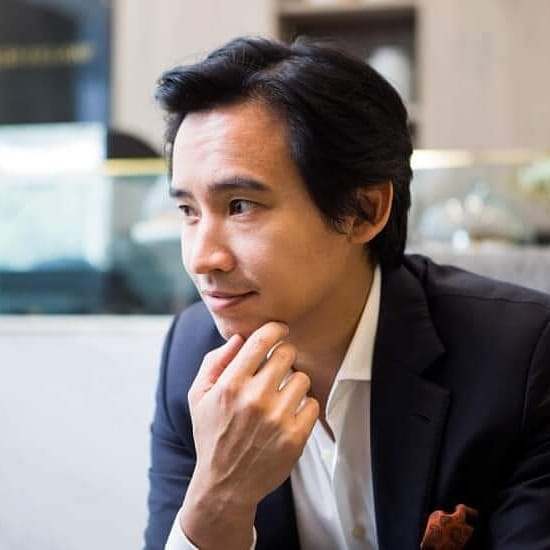 With just two years in the field of politics, Pita Limjaroenrat has taken on the challenging mission of leading more than 50 MPs elected under the banner of the now-defunct Future Forward Party in their fight for democracy.

His appointment as their interim leader on Sunday did not come as a surprise given that he has always been openly supported by former Future Forward leader and co-founder Thanathorn Juangroongruangkit.

Most, though not all, former Future Forward MPs declared their intention to be led by Pita to the Move Forward or Kao Klai Party, especially after he vowed to keep their shared ideologies alive.

Next week, as many as 55 former Future Forward Party MPs, including Pita, will officially apply to join Move Forward Party and it is speculated that if Pita proves to be a strong leader, he will eventually end up leading the party.

Move Forward – previously under the monikers of Phungluang Party and Ruam Chart Pattana Thai Party – contested in the 2019 election, but did not win enough votes to get a seat in Parliament.

“We may have moved to a new home, but our hearts are the same. We stand by the people and democracy. We stand strong against the coup-makers’ moves to cling to power and will continue pushing for progressive policies,” Pita told a press conference on Sunday.

At 38, Pita has built himself an impressive profile. He graduated from the international programme of Thammasat University’s Faculty of Commerce and Accountancy with first-class honours, before going to the United States to pick up degrees at Harvard University (Master of Public Policy) and the Massachusetts Institute of Technology (Master of Business Administration).

But even more impressive is the fact that at the age of just 25, Pita managed to successfully save his debt-ridden family business, CEO Agrifood, from collapsing and rode it to huge success.

Two years after becoming managing director, he turned his company into a leading rice-bran oil producer in the region. He also served as Grab Thailand’s executive director between 2017 and 2018.

Although Pita made his political debut as a member of the Future Forward Party, his family apparently already had some strong political connections. His late father, Pongsak Limcharoenrat, had served as an adviser to an agriculture and cooperatives minister, while his uncle, Padung Limcharoenrat, was once secretary to an interior minister and a close aide to then-prime minister Thaksin Shinawatra.

Influenced by his father and his business background, Pita developed an interest in the agriculture sector and was tasked with formulating agriculture-related policies for Future Forward.

When Pita took to the House floor to discuss the government’s policies in July 2019, he immediately got noticed as a rising political star. His speech on the so-called “Five-Button Theory”, which pointed out how wrong prioritisation had caused prolonged problems in the farming sector, was applauded not just by Future Forward fans but also by many others.

He told the House that key problems like land issues must be addressed first to solve farmers’ woes, and even Interior Minister Anupong Poachinda took notice.

A Super Poll survey conducted immediately after the government-policy statement showed that Pita ranked No 1 on the list of rising stars in the eyes of the public. He even surpassed the dynamo Piyabutr Saengkanokkul, then-secretary general of the Future Forward Party.

The public soon learned that Pita’s speeches were always well prepared and well structured, sending a clear message across effectively and in emphatic language.

“We can’t promise that we won’t fail, but we can promise you we will never give up. We will continue driving society towards our cherished goals,” Pita told Future Forward Party fans on February 21 – the very day the Constitutional Court issued a ruling to dissolve the party.

During the censure debate, Pita raised eyebrows by introducing himself as “a party-list MP of a party that won 6.3 million votes but was disbanded by seven judges from the Constitutional Court.” Similar introduction was adopted by other MPs of the defunct party when it was their turn to speak.

Pita’s eloquence, smart ideas, extensive connections and good looks – which put him on the list of CLEO’s 50 Most Eligible Bachelors in 2008 – have, of course, played a big part in bringing him this far.

However, it remains to be seen how he will be able to leverage his skills and experience in controlling MPs and pursuing their goal of bringing the country forward and ending her problems.

In his personal life, Pita is currently in the process of getting a divorce. His seemingly perfect marriage to actress Chutima Teepanart fell apart last year. The couple has one daughter. 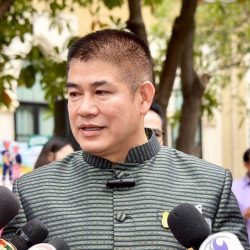 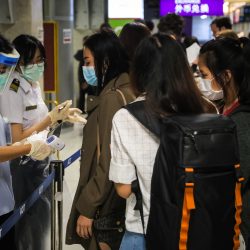 10,000 baht reward for info leading to arrest of quarantine escapees