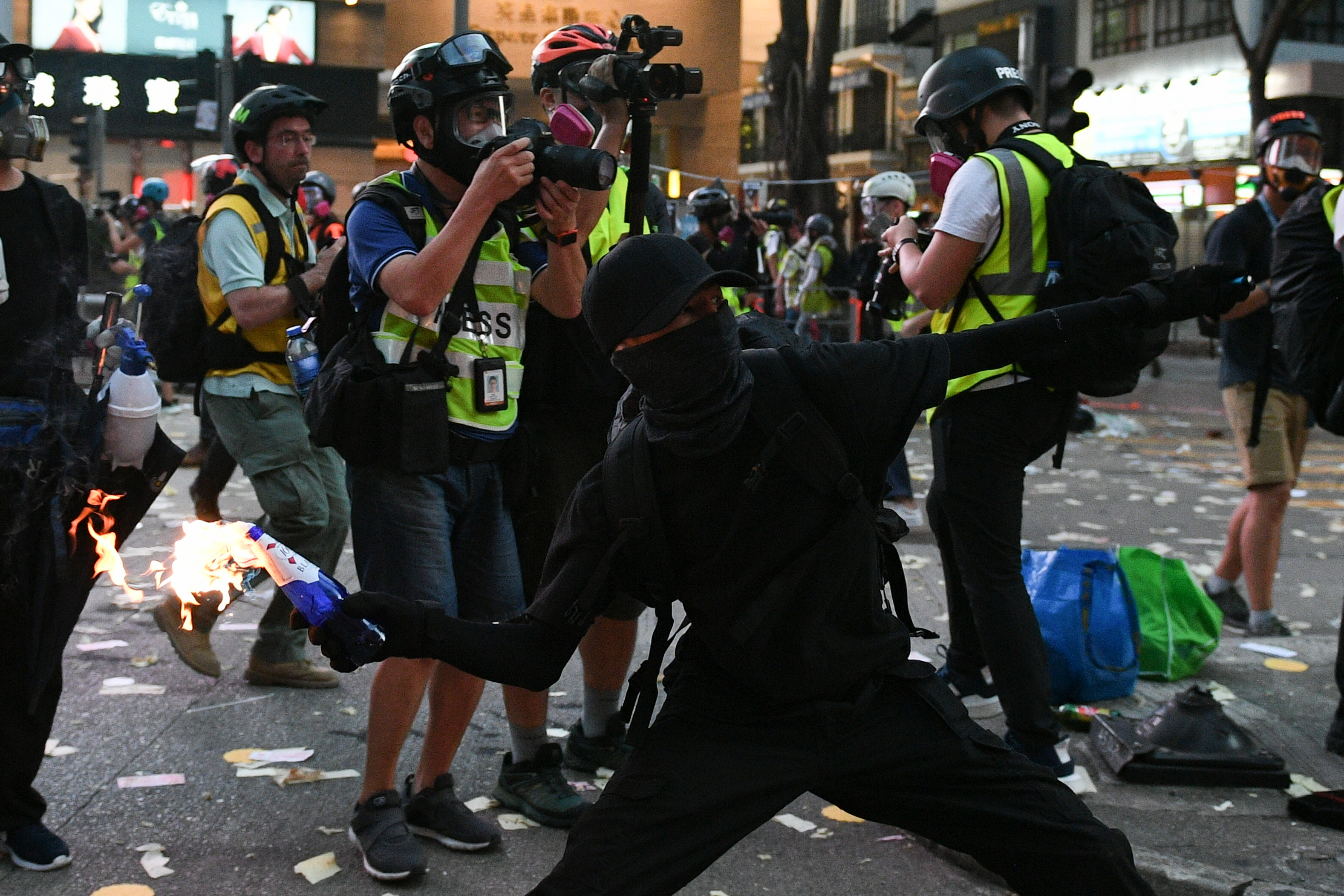 A protester throws a Molotov cocktail against riot police in Hong Kong on October 1, 2019, as violent demonstrations take place in the streets of the city on the National Day holiday to mark the 70th anniversary of communist China’s founding. – Strife-torn Hong Kong on October 1 marked the 70th anniversary of communist China’s founding with defiant “Day of Grief” protests and fresh clashes with police as pro-democracy activists ignored a ban and took to the streets across the city. (Photo by Mohd RASFAN / AFP)

(AFP) Hong Kong police shot a pro-democracy protestor in the chest on Tuesday as violent clashes erupted across the city hours after China held a massive military parade in Beijing to celebrate 70 years of Communist Party rule.

It was the first such injury from a live round in nearly four months of increasingly violent protests and threatened to strip the spotlight from China’s carefully-choreographed birthday party, designed to underscore its status as a global superpower.

While President Xi Jinping took salutes from some 15,000 troops in the capital, pro-democracy protesters in Hong Kong threw eggs at his portrait, with tens of thousands of people defying police orders to disperse.

Running battles raged for hours across multiple locations, with some hardcore protesters hurling rocks and Molotov cocktails, while police responded for the most part with tear gas, rubber bullets and water cannon.

But in one area north of the skyscraper district, a police officer unloaded his weapon at close range into a young man, video footage showed.

“An officer discharged his firearm after coming under attack and a protester was struck in the chest in Tsuen Wan district today,” a police source said, requesting anonymity.

The wounded protester received initial first aid from officers before paramedics arrived and took him to hospital, the source added.

Many of the fights in the city were especially fierce with police in one district having corrosive liquid thrown at them and officers in another area retreating into a town hall from projectile-throwing crowds.

Burning barricades sent a pall of black smoke over the city, a regional hub for some of the world’s biggest banks.

The violence cast a shadow over the lavish parade in Beijing where tanks, new nuclear missiles and a supersonic drone paraded down the Avenue of Eternal Peace as Xi and other Communist Party leaders watched from a rostrum overlooking Beijing’s Tiananmen Square.

The event was meant to showcase China’s journey from a poor nation broken by war to the world’s second largest economy.

Xi, who wore the distinctive “Mao suit”, delivered a speech invoking the “Chinese dream” of national rejuvenation — his grand vision of restoring the country to perceived past glory.

“There is no force that can shake the foundation of this great nation,” Xi said from the Tiananmen rostrum where Chairman Mao Zedong proclaimed the People’s Republic of China on October 1, 1949.

Helicopters flew in a “70” formation over the city as troops goosestepped across Tiananmen Square in what state media described as the country’s biggest ever military parade, featuring 580 pieces of armament and 160 aircraft.

The People’s Liberation Army brought out its newest hardware, including the DF-41, a nuclear-capable intercontinental ballistic missile with range enough to reach the entire United States, and the DF-17, a launcher for a hypersonic glider.

Warplanes including the J-20 stealth fighter soared through the smog-choked skies, and state media said a high-altitude, high-speed reconnaissance drone made a public appearance for the first time.

“The party hopes that this occasion will add to its legitimacy and rally support at a time of internal and external challenges,” Adam Ni, China researcher at Macquarie University in Sydney, told AFP.

US trade war negotiations have dragged on, and African swine fever has raced through the country’s pig supply, sending pork prices soaring.

Despite increasing levels of violence, there is still huge public support for a movement that presents the most serious threat to Beijing’s rule since Britain returned it to China in 1997.

In his speech, Xi said China “must adhere” to the one country, two systems policy governing Hong Kong and “maintain the long-term prosperity and stability” of the city

He also called for the “peaceful development” of relations with self-governed Taiwan but also reiterated his determination to seize the island, by force if necessary.

A giant portrait of Mao, followed by those of past leaders and Xi, streamed across the avenue as the president and other officials waved.

Replicas of a space rocket, a homegrown passenger plane and high-speed trains were followed by smiling ethnic minorities — imagery that glosses over accusations of human rights abuses in the frontier regions of Tibet and Xinjiang.

The Communist Party has repeatedly defied the odds to remain in power for seven decades.

Under Mao, tens of millions of people died during the disastrous Great Leap Forward, and the country was plunged into violent chaos during the decade-long Cultural Revolution.

After Mao’s death in 1976, the party launched the reform and opening-up policy under paramount leader Deng Xiaoping, starting decades of breakneck growth and development.

But the party retained a stranglehold on power, sending troops to end the biggest challenge to its rule in 1989 when pro-democracy protesters occupied Tiananmen Square. 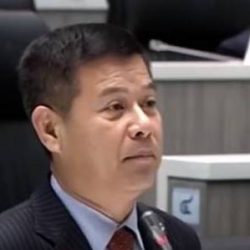 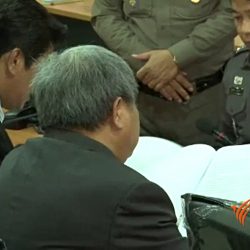