Thailand’s Prime Minister Prayut Chan-o-cha today warned protesting students to be mindful of the risk of COVID-19 infection at congested protest sites, citing a report of the first case, in several months, of a locally-transmitted infection.

The reported new case is a Thai who returned home after completing the mandatory 14-day state quarantine and subsequently tested positive for the virus. Health officials have been trying to ascertain whether he is actually infected.

The Prime Minister’s warning coincides with increased anti-government sentiment among students, which has spread like wildfire across the country and into many educational institutions, including high schools.

About 100 mostly high school students and some members of the general public rallied in front of the Ministry of Education this afternoon (Wednesday) to demand free expression of political issues on campus and to vent their anger at various regulations and curricula, which they claim are outdated and infringe on their freedoms and liberties.

During the rally, they flashed the three-finger sign of the Free People movement, sang pro-democracy songs and blew whistles.

Education Minister Nuttapol Teepsuwan asked the students to meet him on the front lawn of the Ministry, only to be rebuffed by the students, who demanded that he come out of the compound to meet them.

When he finally did go out, he was told to sit in the back row, behind the students, and was shooed away with whistles blowing. 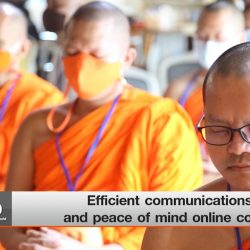