He singled out problem of bribe-taking allegedly committed by immigration officials who prey on tourists, especially Chinese, when they apply for visas on arrival at Suvarnabhumi and Don Mueang international airports.

He reportedly instructed immigration officers at the airports to ensure safety and convenience for incoming tourists and to make sure that no bribes are demanded from tourists.  Bribe-taking is an offence that can get officials involved suspended from duty or dismissed, he said.

Gen Prayut was prodded into action by a recent incident at Don Mueang airport in which a Chinese tourist was assaulted by a security guard after he refused to pay an extra fee for visa upon arrival. A video clip of the incident was later posted on social media in China and has gone rival.   The new immigration police chief, Pol Maj Gen Surachate Hakparn, visited the airport on Monday and ordered an end to the practice by some immigration officers in demanding “tip” from tourists applying for visa on arrival.  In July, a boat loaded with Chinese tourists sank off Phuket Island, killing scores of them.

Kalin Sarasin, president of the Thai Chamber of Commerce, recommended the government to clarify to Chinese government authorities about the unpleasant incidents, including the bribe-taking issue.

The Thai Chamber of Commerce, the Federation of Thai Industries and the Thai Bankers Association met Tuesday to discuss the problems concerning Chinese tourists.  They suggested that the government should introduce double entry visas for Chinese tourists which they believe could attract more Chinese tourists to visit Thailand. 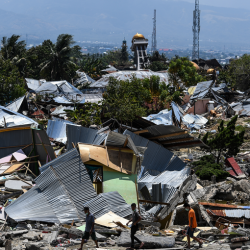 Death toll from Indonesia's quake, tsunami up to 1,234: disaster agency