Prime Minister Prayut Chan-o-cha has ordered relief and rescue units to the northeastern province of Loei, to help flood victims and evacuate those in hard-hit areas, as tropical storm Sinlakul, which made landfall in Vietnam this morning, lashes many parts of Thailand with heavy rain.

The Meteorological Department issued a statement today predicting widespread heavy to very heavy rain in the northern, northeastern, eastern, central and southern provinces until Tuesday, as a result of the tropical storm currently centered over Hanoi.

Packed with wind speeds of 65kph at its centre, the storm is moving west-north-west at a speed of 15kph.

The department predicted that the storm is likely to moderate to a depression later today, as it heads towards Laos.

In the meantime, the southwestern monsoon, which is covering the Andaman Sea and the Gulf of Thailand, is gaining in strength and will cause heavy to very heavy rain across most parts of Thailand, according to the department, as it warned people to brace for flash floods.

Motorists are advised to check conditions with the Highways Department before travelling, to avoid getting stuck in flood water or by damaged roads. 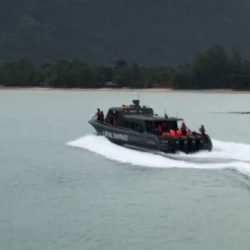