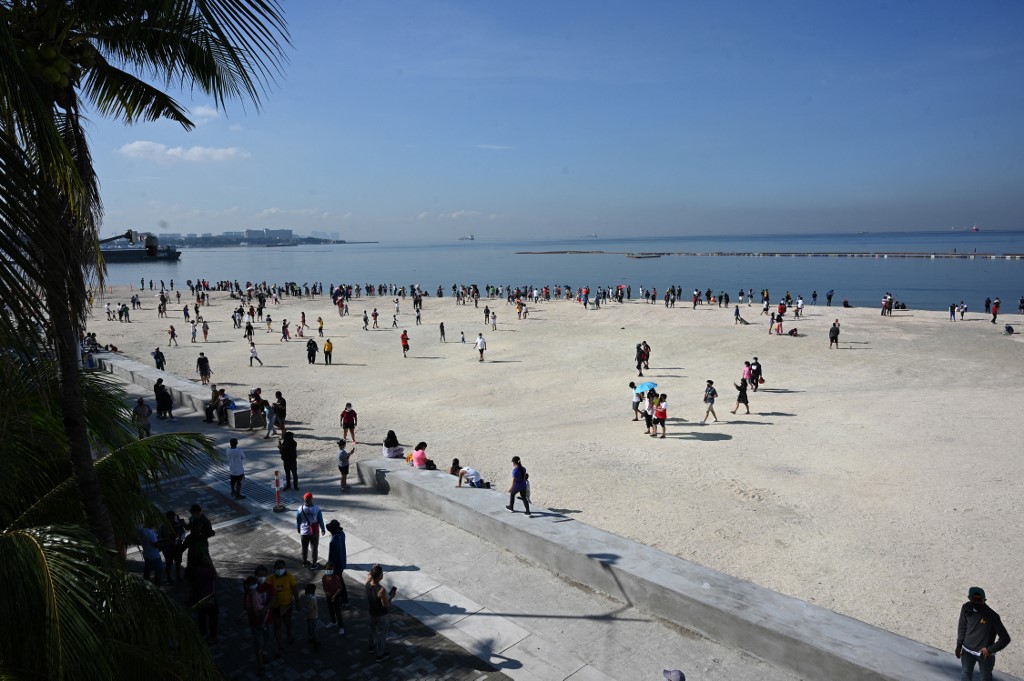 A general view of people trooping to the Manila baywalk dolomite beach along Roxas boulevard in Manila city on October 17, 2021, a day after authorities eased its quarantine restrictions in the nation’s capital. (Photo by Ted ALJIBE / AFP)

Manila (AFP) – The Philippines has temporarily suspended a decision to allow fully vaccinated tourists entry in a bid to prevent a new, heavily mutated coronavirus variant taking off in the country where most of the population remains unvaccinated.

It comes as the Southeast Asian nation on Monday launched a three-day vaccination drive targeting nine million people as young as 12 in an effort to accelerate the roll-out of jabs.

So far, the country has not reported any cases of the Omicron strain, which was first detected in South Africa and has since spread around the globe.

Manila announced plans last week to allow fully vaccinated tourists from most countries to enter from December 1 as it seeks to revive the nation’s battered economy.

But the government’s Covid-19 task force reversed course over the weekend as it announced the suspension of flights from seven European countries, in addition to an earlier ban on arrivals from several African nations.

“The IATF deemed it necessary to suspend the entry of foreign tourists, given worldwide concerns over the Omicron variant,” Bureau of Immigration commissioner Jaime Morente said Monday, using the acronym for the task force.

The decision is a major blow to tourism operators across the archipelago nation, which have been devastated by a plunge in international visitors and restrictions on domestic travel since borders shut in March 2020.

Tourism is a major driver of the country’s economy, accounting for nearly 13 percent of gross domestic product in 2019, when more than eight million people visited, official data shows.

That slumped to 5.4 percent last year as tourist arrivals plummeted 82 percent to 1.48 million.

The government has eased virus restrictions in recent weeks as the daily infection rate hovers at the lowest level since the beginning of the year and the nationwide vaccination rate increases.

But the emergence of Omicron has raised fears curbs could be reimposed.

Around one-third of the country’s 110 million people are fully vaccinated.

The Philippines has recorded more than 2.8 million infections since the start of the pandemic, including over 48,000 deaths.