After most major parties wrapped campaigning Friday night, the pro-Thaksin Pheu Thai party today used a convoy of campaign trucks in a last-minute bid to reach out to Bangkok’s voters.

Core party members and candidates rode pickup trucks on a tour of the city, with loudspeakers blaring out party policies and pleading for public support. The convoy was split into six groups, each led by core party members. Riding on the lead truck, party chief election strategist Khunying Sudarat toured constituencies 1, 5, 6, 7, 8, 12, 13 and 19. The party’s prime ministerial candidate, Chatchat Sittipunt, led another convoy to constituencies 1, 5, 6 and 7.

Party secretary-general Phumtham Vechayachai said that the objective of today’s campaigning was to urge voters to exercise their voting rights tomorrow to get rid of an “illegal power”.

Key party member Yongyuth Tiyapairat said that tomorrow’s election will be the most important held in Thailand’s recent political history, noting that the poll would be an opportunity “to teach the dictatorship a lesson.”

On Friday night, incumbent Prime Minister Prayut Chan-o-cha stole the show with a surprise appearance at the rally of the pro-Prayut Palang Pracharat party at Dhephaksdin stadium. This was his first and only personal campaign appearance since election campaigning began.

Like a seasoned politician, the ex-general shook hands with cheering supporters and occasionally raised his clenched fists as he walked confidently onto the rally stage, where he promised to bring the country to prosperity and improve the livelihoods of the people while vowing to die for the motherland if necessary.

He also urged voters to vote for the Palang Pracharat party if they want the country to remain at peace.

“I am ready to die for this land,” he said at one point in his short address. 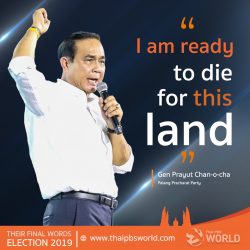