The Thai parliament is clearly divided over the “People’s Constitution” draft, with non-elected senators and government MPs opposing it and opposition MPs, from the Pheu Thai and Move Forward parties, in full support.

The most contentious issue is the proposed abolition of the Senate, in favour of unicameral parliamentary system.

Noting that only few countries have adopted such a system, General Lertrat Rattanavanich, a long-time senator, said that advocates for the draft appear to be in favour of vesting universal power in elected MPs, without the Senate to check them.

He explained that the current senators are not appointed, but elected from professional groups in the country, under a “different” set of elections.

Minister of Natural Resources and Environment and Chart Thai Pattana party’s policy and strategic chief Varawut Silpa-archa said that their MPs will vote against the draft on the grounds that the current charter was approved by 16 million people in a referendum.

Veerakorn Kamprakob, pro-government Palang Pracharat MP, said he personally agrees with the proposed restructuring of the Constitutional Court, but disagrees with many other aspects of the charter draft, such as the unicameral parliamentary system.

He also questioned the opposition Pheu Thai party’s stance in supporting the draft, but endorsed the two-ballot electoral system, which was approved by parliament some time ago.

Move Forward Party MP Teerajchai Phunthumas, however, argued that senators have not changed since Thailand transformed from an absolute to a constitutional monarchy in 1932, as they tend to represent the powers-that-be and are beyond public scrutiny.

As Piyabutr Saengkanokkul, a key proponent of the constitution draft, was addressing parliament in defence of the proposed law, Senator Kittisak Rattanawaraha interjected, saying that the former Thammasat University lecturer should not have been allowed to address parliament, branding him as being ungrateful to the motherland.

The senator’s accusation prompted protests from Nattacha Boonchaiinsawat, also from Move Forward party, who contended that the senator did not explain what was wrong with Piyabutr speaking.

Another Move Forward MP, Rangsiman Rome, also protested and asked Pornpetch Wichitcholchai, who chaired the parliamentary meeting, to order Senator Kittisak to withdraw his accusation, which he did.

Piyabutr later said that he did not hold a grudge against Kittisak, adding that he hoped people who watched the debate would be able to judge the conduct of the senator for themselves.

Parliament is scheduled to vote on the draft tomorrow. 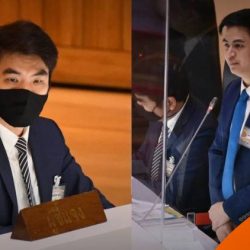