Opposition chief whip Sutin Klungsang has ridiculed today (Tuesday) the pro-government poster for Prime Minister Prayut Chan-o-cha and the ten ministers targeted for censure debate, the last one for this administration which already began this morning. Borrowing the title of the most recent James Bond film “No Time to Die”, the poster declares that the prime minister will not be “killed”, but Sutin claims that he will be “crushed into a pulp”.

Before the start of the debate in parliament this morning, the Pheu Thai MP representing Maha Sarakham province told the media that the Opposition has lined up about 30 MPs who will “grill” the prime minister specifically on a range of issues, ranging from energy, the economy and corruption to foreign affairs.

He said that the Opposition will spend about two and a half days on the prime minister and hopes that the public will not become bored, adding that they will monitor the mood of the audience as well.

The last two to two and a half days will be reserved for the prime minister, the main target of the censure debate, said Sutin.

Opposition and Pheu Thai leader Chonlanan Srikaew, meanwhile, urged the public to monitor the four-day debate, promising that there will be several exciting revelations each day.

“If they do not die in parliament (survive the debate), they will die in the election,” said Chonlanan.

Regarding the Thai Economic party, which pulled out of the coalition government last week, the Pheu Thai party leader said that, if the party’s MPs want to join the censure debate, they will try to provide some time for them. 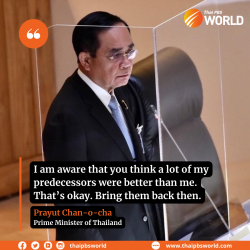