At the latest Thai cabinet meeting, on Dec 28th, the draft bill on so-called Not-for-Profit Organisations was withdrawn at the last minute. The bill will now be considered after the New Year holiday.

The Prayut government would like to reign in both local and international non-governmental organizations (NGOs) because they allegedly perpetuate fake news against and negative views of the government. Worse still, some of them, with funding from abroad, have reportedly tried to topple the current political system under the constitutional monarchy.

There are more than 25,000 local and 87 foreign NGOs in Thailand, making it one of the biggest hubs in Asia. For decades, Thailand has welcomed the presence of foreign-funded civil society organizations (CSOs), thinking that this would raise the country’s image as an open society moving toward full democracy. Somehow, that deep rooted good will and projected image has not come to fruition.

Instead, the government has come under constant attack by these organisations, which have sometimes perpetuated allegedly untruthful information and made inflammatory remarks. To be fair, some of them have pinpointed the weaknesses and legislative loopholes, which allow the impunity and violations of human rights in the broader society to continue. As such, the country still needs the CSOs to improve its overall well-being.

After years of preparation and study, including consultative meetings with stakeholders, the government has decided that the time has come to proceed with the draft bill, which will require all not-for-profits to reveal their financial sources, spending details and more. Failure to do so could have grave consequences, as it could be treated as a criminal offence, a measure that the CSOs have strongly condemned.

Some of the foreign NGOs have no problem in complying with the transparency requirements, which will be required, as their funders already demand such practices. Some funders, however, treat such practices as acts of intimidation. This is particularly the case for the CSOs focused on advocacy. Obviously, local groups, which do not want to reveal any audited records, are fuming, stating that this is an oppressive measure aimed at cracking down on their activities.

To show support for the CSOs, representatives of the US and other Western embassies based in Bangkok met with selected groups of local and foreign CSOs on Tuesday. Among them was a representative from Amnesty International, which is currently embroiled in controversy due to its campaigning in support of the youth movement, which is calling for reform of the monarchy.

Thailand is still tolerant of the presence of NGOs, especially foreign NGOs of all creeds, but it will not tolerate those who advocate for the ongoing campaign for reform of the royal institutional, which it considers an internal matter. For decades, the presence of these civil society organizations has been viewed positively. That is no longer the case for some. In the near future, pending the draft bill, the government will toughen its engagement with the CSOs. Both recipients and funders will have to come clean and be accountable, or face consequences.

Ideally, the INGOs should help promote the causes of the locals and enable local communities eventually to function independently, rather than relying increasingly on external support.

The NGOs should promote their noble causes by offering both service and advocacy. The cause that they claim to champion, such as human rights, is universally desirable, but their approach should take into consideration the local context.

The challenges for INGOs operating in Thailand is how to get the locals to buy into their campaigns, by not leaving an impression that they are forcing the agenda of their donors. 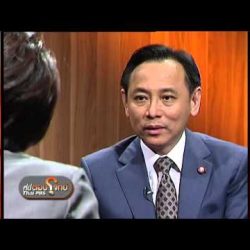 Why ‘mercy’ for mega-corruption convicts could cost Thailand dear

Thai House Speaker complains of too much game playing in parliament