At first, after weeks of denial, it was hard to believe that Russian President Vladimir Putin had declared war on Ukraine. US President Joe Biden had warned, time and time again, that Russia was poised to attack Ukraine. Some even questioned Biden’s motives for coming out with such statements, even if they were based on US intelligence. Now, Putin has become Pinocchio. The dispatch of Russian “peace keepers” to the newly recognised independent states of Donetsk and Luhansk was well planned and executed. Every move was made with precision.

Putin said Russia has no intention of occupying Ukraine. If that is the case, he must announce quickly the timeframe for the withdrawal of Russian troops both from Eastern Ukraine and along the borders. Putin wanted to show the world that he is no puppet and that Russian security concerns must be taken seriously. Ultimately, his patience ran out and the war drums started beating.

Already, Russian firepower has done great damage to Ukraine’s air defence systems and other military installations. The longer the Russian aggression goes on, the greater the casualties. As long as there is a presence of 180,000 troops at the Russia-Ukraine border, security will be fragile.

Russia is a strategic partner of ASEAN. Its actions over Ukraine have sent a chill down the spines of all members. ASEAN is concerned that the current situation in Ukraine will impact the post-COVID- 19 economic recovery. Like many other regions, ASEAN members depend on energy imports from abroad. Already, the price of oil has shot up to more than US$100 per barrel, just hours after Russia’s military move in Eastern Ukraine.

Key ASEAN members are also worried that, if the Ukraine conflict drags on, it will rapidly impact the region’s major summits planned for later this year. The ASEAN-related summit, scheduled for early November in Cambodia, could be jeopardised. Both Joe Biden and Putin are scheduled to attend the summit and the East Asia Summit. A few days later, Thailand is to host the Asia Pacific Economic Cooperation Leaders Meeting in Bangkok. With the strained relations between great powers, these summits, if so desired, could serve as platforms on which adversaries meet and exchange views. Alternatively, they could disrupt the scheduled meetings altogether. They are supposed to be the post pandemic face-to-face summits.

Russia must now withdraw all of its troops and stop its violation of Ukraine’s sovereignty. Both the US and NATO must refocus on diplomacy, which should be given another chance. The United Nations Security Council, which Russia is chairing, should now be the proper platform on which to iron out differences. At this critical moment, ways must be found to halt Russia’s military activities inside the Donbas region. Russia’s actions must be condemned, as they have violated international laws, with which Moscow pledges to comply.

In turn, Russia’s security concerns must be taken seriously now by the US and Europe. Putin has shown that, if his country’s security concerns are not fully addressed, he is willing to do the unimaginable. Already, he has reiterated that any interference by any country will be retaliated against in a manner that has “not been seen in history”. Well, there is no need to prove his words or his intention. As the most powerful person in Russia, he will do whatever he thinks would strengthen the sphere of Russia’s influence. As long as he is dissatisfied with the arrangements with the US and NATO, no country in the neighbourhood will be safe, especially those sharing borders with Russia.

No travel restrictions in Thailand during Songkran this year 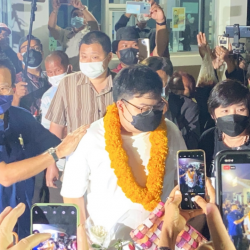