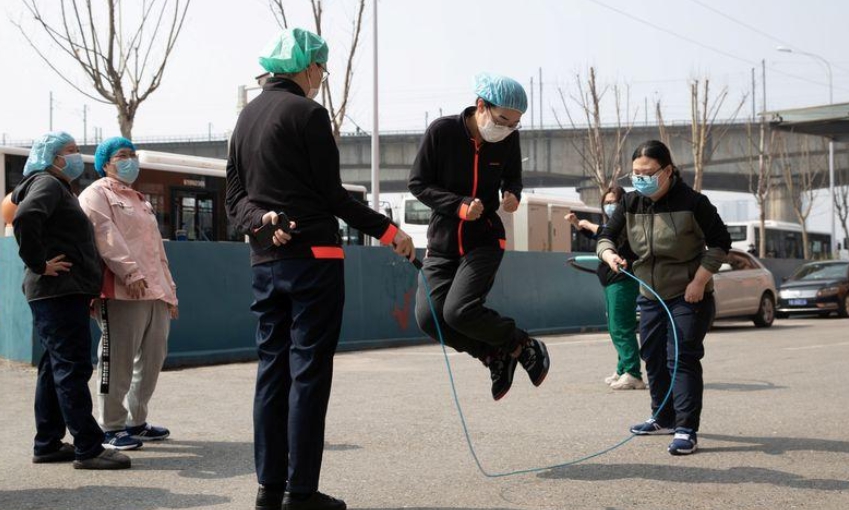 Medical workers wearing face masks jump rope as they take a break outside the hotel where they stay, in Wuhan, the epicentre of the novel coronavirus outbreak, Hubei province, China March 5, 2020. China Daily via REUTERS

BEIJING (Reuters) – Wuhan, the epicenter of China’s coronavirus epidemic, will likely see new infections drop to zero by the end of this month, an expert with the country’s top panel on battling the illness said on Thursday, even as the city reported a quicker rise in new confirmed cases.

Mainland China had 139 new confirmed cases as of Wednesday, the National Health Commission (NHC) said, bringing the total accumulated number of cases to 80,409. Authorities reported 119 new cases the previous day and 125 the day before that.

The increase reversed three straight days of declines, and was driven by a rise in new infections in Wuhan, the city where the virus is believed to have emerged in a seafood market late last year.

Zhang Boli said almost all regions outside Hubei province, where Wuhan is the capital, had managed to halt new infections by the end of last month, according to an interview with the official People’s Daily.

He estimated other cities in Hubei will hit such a target by mid-March, based on data on how the outbreak has evolved, but did not give details.

New infections in Wuhan climbed to 131 from 114 a day earlier. There was no immediate elaboration.

After what some critics said was an initially hesitant response to the new virus, China imposed sweeping restrictions to try to stop it, including transport suspensions, lockdowns of cities and extending a Lunar New Year holiday across the country.

The number of new confirmed cases in Hubei, excluding Wuhan, has remained in single digits for seven consecutive days, with three new infections recorded on Wednesday.

In the rest of mainland China, outside Hubei, there were only five new confirmed cases, the health commission said.

The death toll from the outbreak in mainland China had reached 3,012 as of the end of Wednesday, up by 31 from the previous day. Hubei accounted for all of the new deaths, including 23 in Wuhan.

In another sign things are starting to return to normal, Chibi, a small city just south of Wuhan, said it will remove road blocks and restore normal traffic within its jurisdiction by Friday morning, partly to facilitate spring ploughing.

Chibi would be among the first cities in Hubei to loosen traffic curbs on travel within city boundaries. Located on Hubei’s southern border with Hunan, Chibi has reported no new cases of infections for 19 days as of March 4.

However, traffic between Chibi and other counties and provinces remains forbidden, the official Hubei Daily said, citing a notice issued by Chibi epidemic control authorities.

FOCUS ON INFECTIONS FROM ABROAD

Chinese authorities have turned their attention to stopping the virus being brought in from new hot spots abroad.

The number of new infections overseas now exceeds the tally of new cases in China, with Italy, South Korea and Iran in particular seeing worrying spreads of the virus. The U.S. death toll rose to 11 as new cases emerged around New York City and Los Angeles.

Hu Xijin, the editor of the widely-read Chinese state-backed tabloid the Global Times, wrote on Twitter that President Donald Trump administration’s attempts “to downplay the epidemic is disturbing”.

“I have called on Chinese local governments to implement 14-day quarantine for all people coming from the U.S.,” he wrote.

Authorities have asked overseas Chinese hoping to return home to reconsider their travel plans, while cities across the country have set up quarantine rules for those entering from high-risk places.

An infected person is known to have arrived in China from Iran last week.

The cities of Shanghai and Guangdong have ordered people who have been in countries with severe outbreaks within the previous two weeks to stay in quarantine for 14 days.

The city of Chengdu in central Sichuan province said it was also ordering quarantine for such people.

The NHC has said authorities are transitioning from “overall containment to targeted containment” measures, with a focus on containment within communities, and medical treatment. 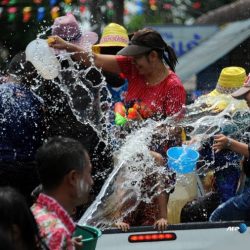