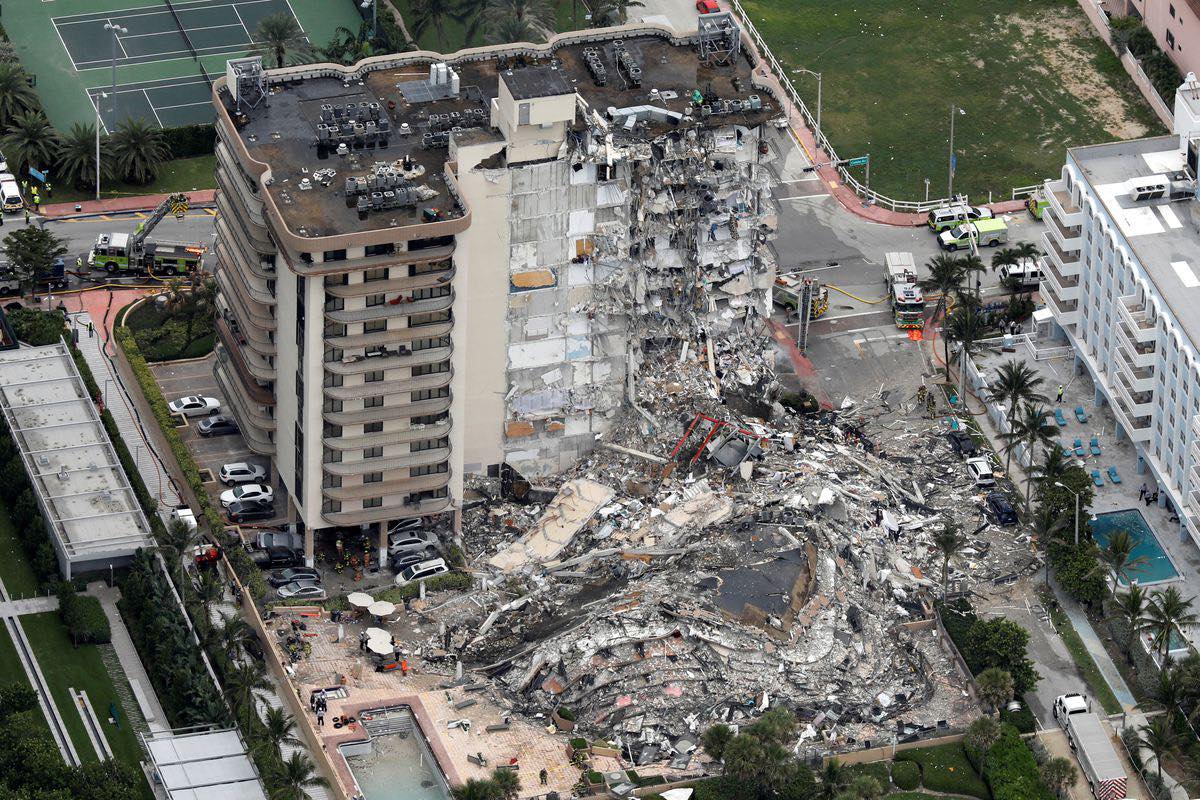 SURFSIDE, Florida (Reuters) – Rescue crews picked through tons of rubble on Thursday looking for survivors after the collapse of part of an oceanfront apartment tower overnight near Miami, where officials reported at least one person dead and nearly 100 missing.

Search teams detected sounds of banging and other noises but no voices coming from the mounds of debris hours after a large section of the Champlain Towers South condominium in Surfside, a barrier island town across Biscayne Bay from the city, crumbled to the ground, authorities said.

What caused the 40-year-old high-rise to tumble into a heap in a matter of seconds was not immediately known, though local officials said the 12-story tower was undergoing roof construction and other repairs.

Miami-Dade County Mayor Daniella Levine Cava told reporters 99 people remained unaccounted for some 18 hours after the collapse, though some may not have been in the building at the time. Another 102 individuals whose whereabouts were initially unknown have since been located and “declared safe,” she said.

A fire official said earlier that 35 people were evacuated from the portion of the high-rise left standing, and response teams using trained dogs and drones in the search of survivors pulled two individuals from the rubble – one of them was dead.

“Fire and rescue are in there with their search team, with their dogs. It’s a very dangerous site right now. Very unstable,” Miami-Dade Police Director Freddy Ramirez said earlier in the day. “They’re in search-and-rescue mode, and they will be in that mode for a while. They are not quitting. They’re going to work through the night. They are not stopping.”

Ramirez said the numbers of known casualties and people missing were likely to fluctuate.

“I don’t want to set false expectations,” he said. “This is a very tragic situation for those families and for the community.”

Said Oliver Gilbert, vice chair of the county board of commissioners: “I just have to implore everybody, just pray.”

Sally Heyman, a Miami-Dade County commissioner, told CNN early in the day that officials knew of 51 individuals who “supposedly” live in the building, home to a mix of year-round residents and part-time “snow birds” who spend the winter months in Florida.

Officials said the complex, built in 1981, was going through a recertification process requiring repairs, with another building under construction on an adjacent site.

“There were structural issues obviously – the building did collapse,” Levine Cava told reporters. She said structural engineers were working with firefighters to shore up the part of the building left standing.

Jenny Urgelles awoke to news that her parents’ building had collapsed. She called them, but their phones went straight to voicemail, she told WSVN 7 News.

“I am holding on to hope,” she told the local Fox affiliate.

Footage from WPLG Local 10, a Miami TV station, showed a rescue team pulling a boy from piles of debris and rebar, and firefighters using ladder trucks to rescue residents trapped on balconies.

The search effort was slowed by at least one fire that burned at the site as emergency crews doused the rubble with water, local media reported.

Footage captured by a security camera nearby showed an entire side of the building crumbling in two sections, one after the other, in billowing clouds of dust at about 1:30 a.m. (0530 GMT).

Cohen, evacuated from the stricken building with his wife, also said there had been construction for more than a month on the building‘s roof.

The Champlain Towers South had more than 130 units, about 80 of which were occupied. It had been subject to various inspections recently due to the recertification process and the adjacent building construction, Surfside Commissioner Charles Kesl told Local 10.

“There were garage-underground issues related to that, to make sure that it was done soundly,” Kesl said. “There were some cracks from that project – minor cracks – that were just patched up. Nothing, based on my understanding, to the magnitude that would indicate that there was a structural problem that could result in something so catastrophic.”

Surfside Mayor Charles Burkett said construction work was being done on the roof but there was no indication it caused the collapse.

“It’s hard to imagine how this could have happened,” Burkett told reporters. “Buildings just don’t fall down.”

Burkett said the collapse left a third or more of the building – a section with balconies facing the beach – “totally pancaked.”

At least six Paraguayan nationals were among those unaccounted for, Paraguay’s Foreign Affairs Ministry said, including the sister of Paraguay’s first lady, the sister’s husband Luis Pettengill and their three children. 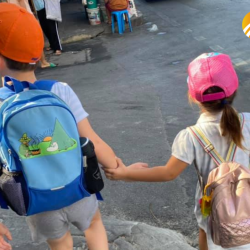 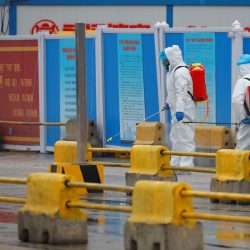