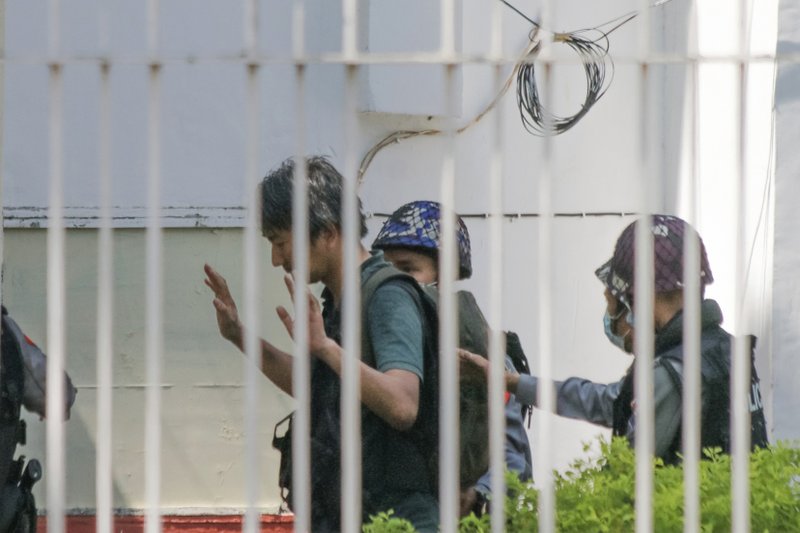 In this Feb. 26, 2021, photo, Japanese journalist Yuki Kitazumi raises his hands as he is escorted by police upon arrival at the Myaynigone police station in Sanchaung township in Yangon, Myanmar. Japan’s government said Monday, April 19, 2021 it is asking Myanmar to release the Japanese journalist who was arrested by security forces in its largest city of Yangon the previous day. (AP Photo)

Press cards, cameras and all equipment set aside, news reporters in Myanmar go underground and carry on doing their jobs, amid the climate of fear, brought on by the military junta.

Ordinary civilians, meanwhile, live in constant fear of arbitrary arrest and intimidation, deprived of the right to information and free movement.

“From my personal experience, I will not carry any identification that I am a member of the press,” a journalist in Yangon, alias David Tun, told ThaiPBS World in an exclusive interview. “If they search you and find out you are a journalist, they will probably keep you a while to question you, and if they find any incriminating evidence on your phone or in your backpack, they are going to lock you up.”

Press freedom was already limited during the time of the so-called democratic government, led by civilians, but the situation got even worse when the Tatmadaw (armed forces) took power. According to Tun, some news reporters have been followed as they try to do their jobs.

So, correspondents in Myanmar have to keep a low profile and go about getting information and reporting it secretly.

“I will try to get information over safer options, like the phone or the internet,” Tun said. “For face-to-face interviews, there is a fear of the military [intimidating] prominent journalists.”

The situation is so grave that some have fled the country, such as the trio of journalists arrested in Chiang Mai, Thailand, this week, Tun explained. The remaining members of the press go underground in a bid to stay safe and to continue to do their duty, he said.

Despite the pressure, correspondents have managed to keep their spirits up. “[Journalists] are risking our lives to do our job. If we don’t do it, nobody will,” Tun told ThaiPBS World.

Some people bypass the firewall by using Virtual Private Network (VPN) services. Others, including many journalists, turn to Telegram, one of the safest texting applications in the world, for exchange of information.

The climate of fear is also present in other aspects of people’s daily lives.

Tun said that, even though the curfew has been moved back from 8pm to 10pm, many people are intimidated by security officers if they stay out too late.

People are regularly searched by the police, who reportedly might also confiscate people’s personal belongings, such as mobile phones or other valuable items, according to Tun.

“People live in a state of fear and panic,” the veteran journalist said.

Tun also addressed the rampant violence in the streets, between the military and the protesters.

Asked if he is optimistic that the situation will end peacefully in the near future, Tun said “Not at all, unless a big enough external factor comes along. ASEAN is not likely to [make that happen], or at least that’s what people think.” 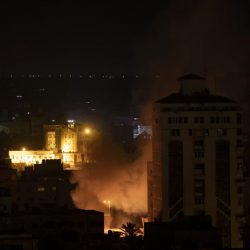 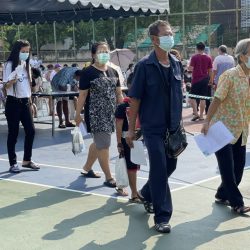