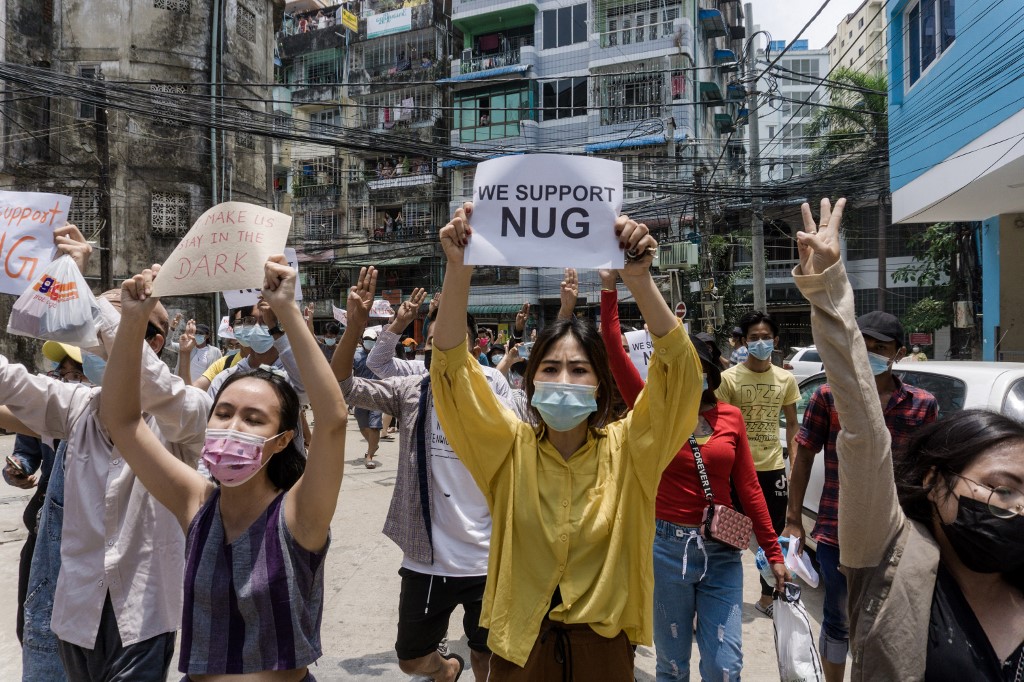 Protesters hold signs in support of the National Unity Government (NUG) during a demonstration against the military coup in Yangon’s Sanchaung township on April 27, 2021. (Photo by STR / AFP)

Myanmar’s pro-democracy unity government, formed to oppose the military junta that seized power nearly three months ago, on Wednesday ruled out talks on the crisis until all political prisoners are released.

The 10-member Association of Southeast Asian Nations (ASEAN) has been trying to find a path for Myanmar out of the bloody turmoil that followed the Feb. 1 coup and has called for an end to violence and talks between all sides.

But the junta has already declined to accept proposals to resolve the crisis that emerged from an ASEAN summit last weekend that was attended by Myanmar’s Senior General Min Aung Hlaing, while no one from the civilian side was invited.

The pro-democracy National Unity Government (NUG), which includes members of parliament ousted by the coup, said Southeast Asia’s regional bloc should be engaging with it as the legitimate representative of the people.

“Before any constructive dialogue can take place, however, there must be an unconditional release of political prisoners including President U Win Myint and State Counsellor Daw Aung San Suu Kyi,” the NUG prime minister, Minister Mahn Winn Khaing Thann, said in a statement.

There was no immediate comment from any senior officials in ASEAN.

Win Myint, Suu Kyi, and others have been detained since the coup, which the military launched as Suu Kyi’s government was preparing for a second term after sweeping a November election.

The military said it had to seize power because its complaints of fraud in the election were not being addressed by an election commission that deemed the voting fair.

April 26th – Though the international community is abuzz with ASEAN’s attempts to intervene and whether the junta will adhere to the five-point consensus, people in Myanmar, be it the strike committees, student unions, or Civil Disobedience Movement participants, are doubtful that the military will serve nothing but lip-service to the other ASEAN nations.

Pro-democracy protests have taken place in cities and towns across the country since the coup. The military has cracked down with lethal force on the protesters, killing more than 750 people, an activist group says. Reuters is unable to confirm the casualties as the junta has clamped down on media freedoms and journalists are among the many people who have been detained.

Protesters marched in support of the NUG in the second city of Mandalay on Wednesday, the Myanmar Now media outlet reported. There was no report of violence.

Alarmed by the turmoil in one of its members, ASEAN held a meeting on Saturday in the Indonesian capital with the leader of the junta in a bid to press him to end the crisis.

ASEAN leaders said after the meeting they had reached a “five-point consensus” on steps to end violence and promote dialogue between the rival Myanmar sides.

The junta later said it would give “careful consideration” to ASEAN’s suggestions, which included appointing an envoy to visit Myanmar, “when the situation returns to stability” and provided that ASEAN’s recommendations facilitated the junta’s own roadmap and served the country’s interests.

Activists had earlier criticised the plan, saying it helped to legitimise the junta and fell far short of their demands.

In particular, it did not call for the release of Suu Kyi, 75, and other political prisoners. The Assistance Association for Political Prisoners advocacy group says more than 3,400 people have been detained for opposing the coup.

The coup has also exacerbated old conflicts between the military and ethnic minority insurgents who have been battling for years for greater autonomy in frontier regions.

Clashes have also broken out in Chin State, which is on the border with India, between anti-coup activists and security forces. Myanmar Now reported 30 government soldiers were killed in four days of clashes there.

A spokesman for the military did not answer calls seeking comment.

Karen insurgents captured Myanmar army posts near the Thai border on Tuesday in some of the most intense clashes since the coup which included airstrikes by the military.

The military launched more airstrikes in the area on Wednesday with both jets and helicopters, Thai authorities monitoring the fighting said, but there was no immediate word on casualties.

About 100 villagers, mostly children, elderly, and pregnant women, crossed to the Thai side of the border to escape the airstrikes, the Free Burma Rangers aid group said.

The Karen and other ethnic minority forces based in frontier regions have supported the largely urban-based pro-democracy opponents of the junta. 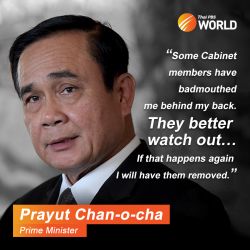