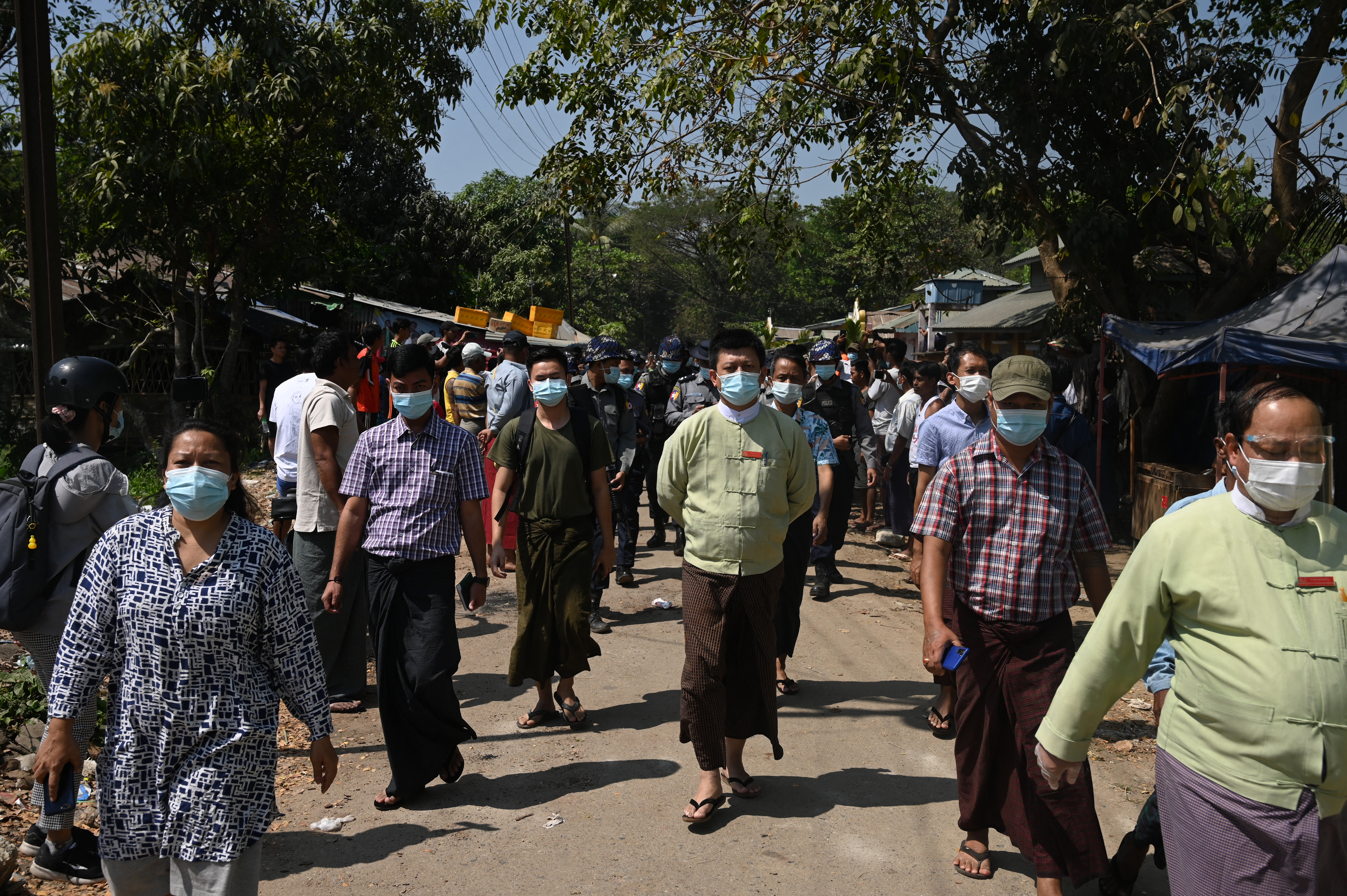 Residents escort police from a neighbourhood after they visited the area in an attempt to force Myanmar Railways staff to return to their jobs, following their refusal to work as part of the Civil Disobedience Movement (CDM) in protest over the military coup, in Yangon on February 14, 2021. (Photo by Sai Aung Main / AFP)

Much of the country has been in uproar since last week when soldiers detained Aung San Suu Kyi and ousted her government, ending a decade-old fledgling democracy after generations of junta rule.

Security forces have stepped up arrests of doctors and others joining a civil disobedience movement that has seen huge crowds throng streets in big urban centres and isolated frontier villages alike.

Police are now hunting seven people who have lent vocal support to the protests, including some of the country’s most famous democracy activists.

“If you find any fugitives mentioned above or if you have information about them, report to the nearest police station,” said a notice in state media on Sunday.

“Those who receive them will (face) action in accordance with the law.”

Among the list of fugitives was Min Ko Naing, who spent more than a decade in prison for helping lead protests against an earlier dictatorship in 1988 while a university student.

“They are arresting the people at night and we have to be careful,” he said in a video published to Facebook on Saturday, skirting a junta ban on the platform, hours before his arrest warrant was issued.

“They could crack down forcefully and we will have to be prepared.”

The 1988 protests vaulted Suu Kyi to the top of Myanmar’s democracy movement, and the Nobel laureate spent years under house arrest as a prisoner of the generals.

She has not been seen in public since she was detained on February 1 alongside top aides.

Nearly 400 others have been arrested in the days since, including many of Suu Kyi’s top political allies, according to the Assistance Association for Political Prisoners monitoring group.

In Yangon, many areas have begun forming neighbourhood watch brigades to monitor their communities overnight — in defiance of a junta curfew — and to prevent the arrests of residents joining the civil disobedience movement.

Some have also expressed fears that a mass prisoner amnesty this week was orchestrated to release inmates into the public to stir up trouble, while freeing up space in overcrowded jails for political detainees.

“We don’t trust anyone at this time, especially those with uniforms,” said Myo Ko Ko, a member of a street patrol in the commercial hub Yangon.

Near the city’s central train station, residents rolled tree trunks onto a road to block police vehicles and escorted away officers who were attempting to return striking railway employees to work.

Thousands elsewhere in Yangon took to key intersections around the city in a ninth straight day of street protests.

A day earlier, Buddhist monks gathered outside the city’s US embassy and chanted the Metta Sutta, a prayer that urges protection from harm.

“We wanted them to know most citizens in Myanmar are against the military,” said Vicittalankara, one of the participants.

The country’s new military leadership has so far been unmoved by a torrent of international condemnation.

An emergency session of the UN Human Rights Council on Friday called for the new regime to release all “arbitrarily detained” people and for the military to hand power back to Suu Kyi’s administration.

Solidarity protests have been staged in neighbouring Thailand, home to a large community of Myanmar migrant workers, as well as the United States, Japan and Australia.

But traditional allies of the country’s armed forces, including Russia and China, have dissociated themselves from what they have described as interference in Myanmar’s “internal affairs”.

The junta insists it took power lawfully and has instructed journalists in the country not to refer to itself as a government that took power in a coup.

“We inform… journalists and news media organizations not to write to cause public unrest,” said a notice sent by the information ministry to the country’s foreign correspondents’ club late Saturday.

It also instructed reporters to follow “news media ethics” while reporting events in the country. 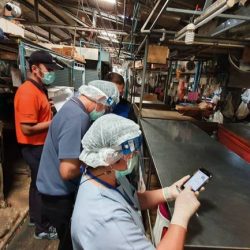 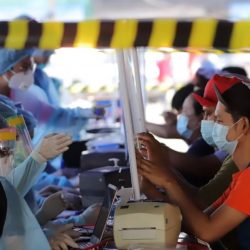