Thailand may have its own COVID-19 vaccine in the next nine months, if every stage of the development proceeds smoothly, according to the country’s Public Health Minister Anutin Charnvirakul on Thursday.

The vaccine is joint development between Bionate Asia and the National Vaccine Institute.

Mr. Anutin said he is pleased that the candidate vaccine has been successfully tested in mice, with the animals safely developing immunity to the virus, adding that blood samples from the test mice have been sent to the Medical Science Department to assess the efficacy of vaccine candidate.

The next step, said the Minister, is to seek approval from the Thai FDA to bypass the second phase of tests on primates, and move directly to testing the candidate vaccine on humans, while insisting that safety and human trial ethics will be strictly observed.

Mr. Anutin said that the Government attaches importance to the vaccine trial, so that Thailand can have its own vaccine, adding that the Public Health Ministry has been allocated 3 billion baht, of the 1 trillion baht additional public sector borrowing, for the development of a SARS-CoV-2 vaccine. SARS-CoV-2 is the virus which causes the COVID-19 disease in humans.

Mr. Vithoon, meanwhile, said that Bionate Asia has expertise in the development of vaccines, citing the whopping cough vaccine, which was developed by the company and approved by the World Health Organization.

If everything proceeds well, he said he expects trial on humans to start in July or August.

Thailand set to extend state of emergency until end of July 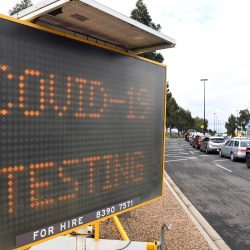