The Department of National Parks, Wildlife and Plant Conservation and various environmental organisations have agreed to tighten up measures to protect wild tigers in the western forests of the country after two tigers were shot dead by suspected poachers early last month and a cattle herder was attacked by a tiger in Thong Pha Phum district of Kanchanaburi province.

Officials from the department and representatives from the International Union for the Conservation of Nature (IUCN), the Seub Nakhasathien Foundation, the World Wildlife Fund (WWF), the Freeland Foundation and Panthera Thailand met yesterday (Tuesday) to develop measures aimed at protecting wild tigers, the population of which is dwindling as a result of poaching for their precious hides and organs. Another part of the plan to protect the species is to try to push them back deep into the forest.

Some of the measures include:

The Western Forest Complex (WEFCOM) is an area of 18,000 square kilometres and extends into Myanmar border along the Tenasserim hills. It is considered the largest remaining tract of forest trace in Southeast Asia and was recognised as a World Heritage Site in 1991.

Supranee Kampongsun, of IUCN Thailand, said that funding, which was initially earmarked for the implementation of a tiger conservation project along the Thai-Myanmar border, will be used for a similar project in Kanchanaburi province instead, because of the problems in Myanmar. She added that additional funding will be sought from the Global Environment Fund.

Tim Redford, of the Freeland Foundation, said that camera traps will be installed in forests in Khao Laem national park, starting tomorrow (Thursday).

Kritsana Kaewplang, of Panthera Thailand, an organisation devoted exclusively to the conservation of wild tigers, proposed during the meeting that a hunting ban should be declared in the southern region of the western forests. 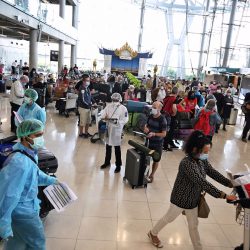 Over 23,000 apply for Thailand Pass under ‘Test and Go’ on first day of its resumption